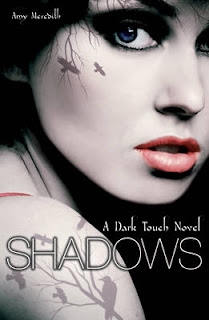 First Line:
The ghost slipped between the two pine trees, moving silently, not even leaving footprints in the pine needles on the ground.

Review: Shadows is the first in the Dark Touch series and in which we are introduced to Eve and Jess, two BFFs living in the Hamptons who are just starting high school. Over the summer there have been two significant new arrivals to the community: blonde Luke, the not so angelic son of a preacher-man and Mal the smouldering new resident at the old rock god's mansion.

Along with hot new boys, a new element is in town - many of the female residents are having nightmares and spouting about demons before being carted off the the psychiatric hospital.

Eve has become extremely clumsy of late but what is causing all her electrical equipment to go on the fritz and did she really melt her own lipstick when she got upset? When Eve's dad reveals some secret family history, the pieces begin to fall into place and it seems Eve is the only one who can save the town's sanity.

I really enjoyed Shadows. It's a bit of a cross between Buffy and Sex in the City with its mix of the supernatural and designer labels. There's action and romance, fashion and shopping and setting it in the Hamptons means there are very few appearances by the parents who are too busy working, to be at home. Shadows sets up Eve and other main characters and the plot is resolved but with a hint of a storyline for the next book. One thing I found refreshing about this book is that the girls eat and they eat pizza and ice-cream and hot chocolate without any reference to calories! I'm looking forward to The Hunt which is due out in August.
Posted by Karen (Euro Crime) at 07:37