Review: The Awakening by Kelley Armstrong 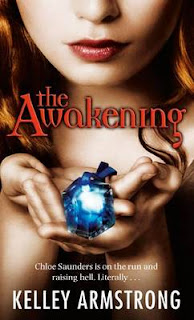 First Lines:
When the door to my cell clicked open, the first thought that flitted through my doped-up brain was that Liz had changed her mind and come back.

The Awakening is the second in the Darkest Powers series which began with The Summoning. The main character is Chloe Saunders, a fifteen-year-old necromancer. At the end of the last book, she and her fellow supernaturals, were on the run from their group home, Lyle House; the two girls were captured and the two boys escaped. Chloe and Rae have been taken to a warehouse facility where they are prisoners along with Tori, who hadn't tried to run off.

It's not long before Chloe is able to find out information about the source of her and her friends' abilities and manufactures a situation in which they escape and reunite with brothers Derek and Simon. Four of the teenagers go on the run, with the sole aim of finding a friend of Derek and Simon's dad who may be able to help them. The Awakening covers their journey and we get to see bonds and unexpected alliances form between group members whilst being hunted, and Chloe tries to avoid raising the dead.

As with The Summoning, I enjoyed the book very much. I felt completely at ease with the writing and I was gripped throughout. There's plenty of action, including some scary moments, especially if you don't like bats, but the main focus of The Awakening, I felt, is that of character development. You get much more of a handle on the personalities than in the first book. The next part, The Reckoning, is now out and I can't wait to see how all the threads are drawn together.
Posted by Karen (Euro Crime) at 09:59