Review: The Vampire Diaries: The Reunion by L J Smith 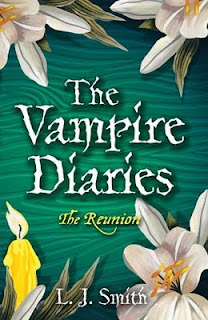 First Lines:
"Things can be just like they were before," said Caroline warmly, reaching out to squeeze Bonnie's hand.

Review: Bonnie, Meredith and Matt are trying to get their lives back together after the terrible and tragic events recounted in the previous three books. Their friends Elena, Stefan and Damon have left Fell's Church and Matt in particular is not coping well.

Bonnie's psychic gift has gone from strength to strength and in her dream she receives a message from Elena but is unsure what it means. When Caroline tries to recreate their cozy, girl get-togethers it all goes horribly wrong as their party is gate-crashed by evil. One girl is left dead and another traumatised.

Elena sends another message which allows Bonnie to summon Stefan (and Damon) back to town. The five of them have to discover who or what is threatening them and how they can stop it, especially as the enemy is more powerful than they can imagine...

I enjoyed The Reunion very much. The action doesn't let up and makes for a quick read. I liked that it was told more from Bonnie's point of view and we get to see her character mature. Stefan and Damon play a larger role also, though Stefan's plans never go well, leaving the poor boy with tons of guilt to carry. In The Fury, it became clear that Damon is not such a baddie after all and he redeems himself further in this book.

The final battle is won with the assistance from an unexpected source (the baddie made an error in judgement when choosing the time and place of the final confrontation) but the ending is still a bit of a tear-jerker (in a good way).

My only niggle really is that the 'evil one' was said to be dead in an earlier book, but the character who said that must have lied.

The Reunion is the final book in the initial quartet of Vampire Diaries novels however Vampire Diaries, The Return: Nightfall was published earlier this year and I look forward to reading that.

Cover: The candle is very appropriate.
Posted by Karen (Euro Crime) at 08:26