Having just finished the original quartet of Vampire Diaries books, I'm keen to carry on with the series which is continued in 2009's Nightfall. It's currently available in hardback but I'm waiting for the paperback, which is due out in January.

NB. The synopsis below contains spoilers for the earlier books. 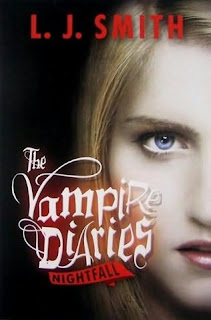 When Elena sacrificed herself to save the two vampire brothers who love her - the handsome, brooding Stefan and the sleek and dangerous Damon - she was consigned to a fate beyond death. Until a powerful supernatural force pulled her back.


Now Elena is not just human. She has powers and gifts that were bestowed on her in the afterlife. What's more, her blood pulses with an overwhelming and unique force that makes her irresistible to any vampire.


Stefan wants to find a way to keep Elena safe so that they can make a life together. Damon, however, is driven by an insatiable desire for power, and wants Elena to rule as his princess. When Stefan is lured away from Fell's Church, Damon seizes his chance to convince her that he is the brother she is meant to be with. . . .


But a darkness is infiltrating the town, and Damon, always the hunter, is now the hunted; he becomes the prey of a malevolent creature that can possess him at will, and who desires not just Elena's blood but her death.
Posted by Karen (Euro Crime) at 08:46