Review: The Vampire Diaries: The Fury by L J Smith 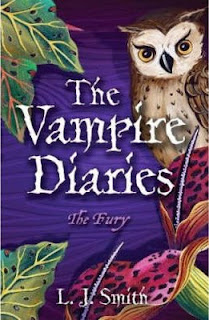 Review: The Fury is the third part of the original quartet of Vampire Diaries novels and carries straight on from The Struggle which is exactly what I did; I picked up The Fury as soon as I put down The Struggle, feeling very fortunate not to have to wait months or longer between the books.

Elena is closer than ever to the feuding brothers Stefan and Damon who, though they have not been in her home town of Fell's Church that long, have turned her world upside down.

The three of them form an uneasy alliance and assisted by Elena's closest friends, they set out to track down and destroy the evil 'Power' that is now threatening the inhabitants of Fell's Church. The final showdown between 'good' and 'evil', results in a shocking revelation and tragedy.

The Fury, is the best of the series so far with non-stop tension. Elena has matured from being self-centred to self-less as she works to save her town from evil. The author set up a few traps in the previous books, which I fell into, and now she reveals the truth behind some of the horrific earlier events. There is a finality to the series about The Fury, with all the threads resolved, so it'll be interesting to see where the fourth book, The Reunion, goes.

Cover: I'm so hooked on these now that the cover is irrelevant however the owl on the front should be a barn owl.
Posted by Karen (Euro Crime) at 01:45