Quite a girly selection this week. I own this Mediator book but have took out the audio book with the view that I might actually get to it quicker! 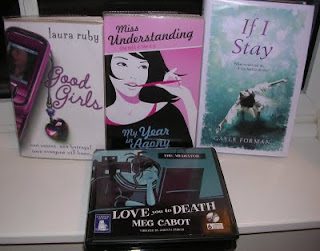 Laura Ruby - Good Girls (2007)
A Forever for the 21st Century. Audrey is a good girl: a good student, daughter and friend. She's also the last person anyone expects to be with Luke DeSalvio, the biggest player at school. On the night she dumps him, someone takes her picture doing something good girls just don't do...The next Monday, messages begin popping up on people's phones and email inboxes. Soon everyone knows, including her teachers, her mum and her dad! Now she must discover strength she never knew she had, find friends where she didn't think she would, and learn that life goes on - no matter how different it is to how you think it's going to be.

T S Easton aka Miss Understanding - My Year in Agony (2009)
Sixteen year-old Anya Buxton has been transferred from her fee-paying school to the local comp. Her parent's acrimonious divorce has left them strapped for cash, and Anya is forced to adapt to her new school life. Deciding to keep her head down and her opinions to herself every day, Anya distracts herself from a chaotic home life and warring parents by becoming the school's anonymous Agony Aunt on the newsletter website.

Her fabulous powers of observation and perception along with a no-nonsense attitude and sometimes caustic wit, makes a big impact on the pupils who write in with their problems. Miss Understanding tells it like it is, and doesn't pull any punches and on the whole delivers wise, and often hilariously brutal advice, along with a few sage observations about her fellow pupils and the teachers at the Academy.

Stirred by her irreverence, the school chucks her off the offical website, but undeterred, Miss Understanding simply sets up her own, along with a regular blog for her readers' entertainment. She is articulate and riveting reading and the problems continue to flood in. But gradually Anya's feelings about her home life, her frustration with her mother and with her father's new wife begin to bias her writing and her responses to problems, and the readers begin to form a picture of who Ms Understanding really is.

Consequently, when she inadvertently raises questions and issues of her own in her blog, her readers start to chip in with advice of their own on how she should cope with and adjust to all the changes in her life.

All this is executed in a consistently funny and wry narrative, and reveals a unique and strong new character in chick lit genre for teens.

Gayle Forman - If I Stay (2009)
'Just listen,' Adam says with a voice that sounds like shrapnel. I open my eyes wide now. I sit up as much as I can. And I listen. 'Stay,' he says. Everybody has to make choices. Some might break you. For seventeen-year-old Mia, surrounded by a wonderful family, friends and a gorgeous boyfriend decisions might seem tough, but they're all about a future full of music and love, a future that's brimming with hope. But life can change in an instant. A cold February morning ...a snowy road ...and suddenly all of Mia's choices are gone. Except one. As alone as she'll ever be, Mia must make the most difficult choice of all. Gripping, heartrending and ultimately life-affirming, "If I Stay" will make you appreciate all that you have, all that you've lost - and all that might be.

Meg Cabot - The Mediator: Love You to Death (2004)
Being a mediator doesn't exactly make Susannah Simon your typical sixteen-year-old. Her job is to ease the path for the unhappy dead to their final resting place. Not all ghouls want to be guided, but Suze is inclined to kick some serious ghost butt if she has to. Now she's moved to California with her new step family and is starting out at a brand-new school. From her first day, her mediator skills are tested to the max when Suze finds herself the target of the murderous spirit of ex-class beauty, Heather. At least she's sharing her new bedroom with Jesse, who just happens to be the hottest ghost in history. Suze is totally warm for his form and is determined to win the heart of the sexiest spirit in town. But can this girl get her ghost?

To be reviewed on this blog:

Abby McDonald - Life Swap (2009)
Take an administrative snafu, a bad break-up, and what shall heretofore be known as The Hot-Tub Incident , and you ve got two thoroughly unprepared sophomores on a semester abroad. For American party girl Tasha, an escape to tweedy Oxford may be a chance to ditch her recent fame as a tabloid temptress, but wading Uggs-deep in feminist theory is not her idea of a break. Meanwhile, the British half of the exchange, studious control-freak Emily, nurses an aching heart amid the bikinis and beer pong of U. C. Santa Barbara. Soon desperation has the girls texting each other tips on fitting in, finding love and figuring out who they really are. With an anthropologist s eye for cultural detail and a true ear for teen-speak, exciting new novelist Abigail McDonald crafts a very funny, fast-paced, poignant look at survival, sisterhood, and the surprising ways we discover our true selves.

To be reviewed for Mystery Women:

Anne Cassidy - Just Jealous (2009)
Elise has a crush. She's been infatuated with her best friend, Carl, for as long as she can remember. When he starts dating an American girl who's just arrived at their school, Elise thinks it will just be a short fling. When she realizes it's not, she decides she needs to take matters into her own hands...

Kate Cann - Fire & Rayne (2009)
Rayne is still enjoying life at remote Morton's Keep, an escape from the city life she hated so much. But there are hints of something creepy and out of kilter still in the house, especially when a mysterious new housekeeper takes over. Then - suddenly and shockingly - a violent murder occurs on the outskirts of Marcle Lees, and Rayne's life is turned upside down all over again...

Suzanne Collins - The Hunger Games (2009)
Sixteen-year-old Katniss Everdeen regards it as a death sentence when she is forced to represent her district in the annual Hunger Games, a fight to the death on live TV. But Katniss has been close to death before—and survival, for her, is second nature. The Hunger Games is a searing novel set in a future with unsettling parallels to our present. Welcome to the deadliest reality TV show ever...
Posted by Karen (Euro Crime) at 20:34