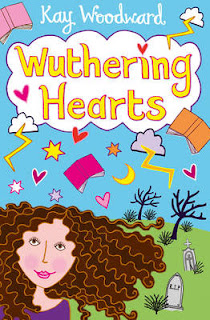 Review: Fourteen-year-old Emily Sparrow lives in a small Yorkshire town near the Brontes home of Haworth. She wants to be an actress and is desperate to star in this year's school production. But she is horrified to hear that it is to be Wuthering Heights.

Robert McBride has just joined the school and is tall, dark, handsome and very moody and Emily is smitten. But what is his problem? When circumstances lead to him moving into her home temporarily she gets to know "charming Robert" but still meets the grumpy version at school.

When both of them are cast in the play it seems that there's an opportunity for the two to rehearse together and so get to know each other and Emily, hopes, time for him to fall for her.

Things don't go as planned, however, and there are both tears and laughter before the two understand each other better.

Wuthering Hearts is a charming romance tale which touches on a couple of serious issues along the way. Emily is a lively, believable and funny narrator who I wanted to be not so quick to blame herself all the time for the misunderstandings with Robert. She has an adorable Auntie O acting as a mum substitute, dispensing wise advice. I loved the trips out in the wild moors and the visit to Haworth, which are both brought vividly to life.

Wuthering Hearts is a short and snappy read which should leave you wanting to read both Emily Bronte's original classic and Kay Woodward's previous book, Jane Airhead, and is suitable for younger teenagers (and older!) and any slightly younger children who like reading about a romance.
Posted by Karen (Euro Crime) at 13:32