Review: The Summer I Turned Pretty by Jenny Han 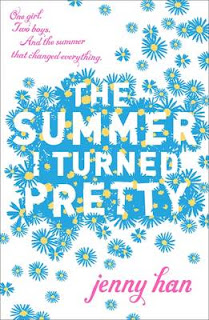 Review: I bought this ages ago and I've been wanting to read it for so long but I was slightly scared to in case it didn't live up to my high expectations but finally I have and it mostly did.

Isabel, with the unfortunate nickname of Belly, goes every summer with her mum and brother to stay at the beach house with her mum's best friend Susannah and her two sons, Conrad and Jeremiah.

Belly is almost sixteen and is blossoming in a physical way now, and Conrad and Jeremiah seem to notice, though they have always treated her as a sister before. Belly has had a crush on Conrad since she was ten but seems no nearer getting him to like her back.

This is probably the last summer before everything changes - college, football school etc - as the boys are all a little bit older than Belly. She wants it to be a perfect summer. Over the course of the summer, Belly meets a boy and relations come to a head cordially with Jeremiah and dramatically with Conrad. However what Belly doesn't realise is that there are other things going on, until she finally gets it, that it's not all about her.

The Summer I Turned Pretty is a quick read and not just because it's told in shortish chapters, but because you just want to find out what happens next. The story didn't go the way I was expecting ie with it all being set in the present summer, but rather was interspersed with flashback to earlier summers, such as one when Belly's best friend stayed for a week and how that unexpectedly upset their friendship. We get to see Belly at growing up over the summers and how what she thinks is true, such as how she believes her mum to be, is not the case at all. I did find Belly slightly annoying at times, due to her immaturity, and I could have done with a bit more Conrad as he's very much a moody character in the background unlike his easy-going brother who has a larger role. At the end of the 'perfect' summer, the book turns slightly more sombre, but I'm really looking forward to seeing what happens next in the sequel, It's Not Summer Without You.