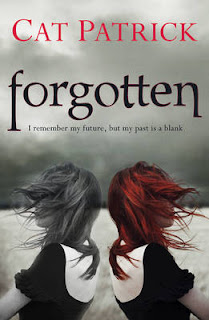 Review: London Lane has an unusual memory issue. Her memories are from the future. Once she's experienced the memory it disappears once she's been to sleep. The only way she can get by is by writing notes to herself which she reads each morning.

She is supported by her (single) mum and best and only friend Jamie. However, a further complication arises when a gorgeous new boy joins the school. Luke singles her out, and the feelings are returned but there's a problem: London cannot see Luke in any of her future memories.

Forgotten takes place over a school year and sees London cope with a boyfriend (whom she meets for the first time every day) and also trying to prevent heartache for her best friend who's about to do something foolish.

In addition a dark memory surfaces and it is this which will see London explore her past. Secrets will be revealed and new relationships formed. But can London change the future?

Forgotten is a book you don't want to put down. There's a really sweet romance with the almost perfect Luke but there's also the pull of a mystery to be unravelled as London does some investigating. Romance and mystery are enough on their own but combined with the premise of someone having no previous memories - it makes for a compulsive read. There were several unexpected reveals which surprised me and the tone is quite dark at times.

The ending wraps things up sufficiently but I would love to spend more time with London and Luke. So once I'd finished it, I immediately went onto Cat Patrick's website to see if there was to be a sequel. Sadly, no. But there will be a book out in 2012 with a new character.
Posted by Karen (Euro Crime) at 12:47