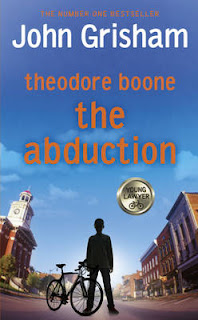 Review: The Abduction is the sequel to the variably received Theodore Boone, from veteran crime writer John Grisham, which introduced the eponymous thirteen-year-old lawyer in training.

The first book left rather a lot of unanswered questions and unfortunately they aren't resolved in this book but look to be picked up in the third; rather The Abduction deals with the disappearance of Theo's friend April who vanished overnight from her home with no sign of broken entry.

When the police hear that a distant cousin of hers, whom she has been writing to, has escaped prison and returned to April's town of Strattenburg, they immediately begin a manhunt. At the same time Theo and his friends carry out their own search.

There will be some tense and sad times ahead before Theo cracks the case ahead of the police.

There's not much to the plot so I can't say any more than that. I didn't enjoy The Abduction as much as Theodore Boone unfortunately. Not a lot happens and there isn't much development of the scenario of the family, the estranged brother/uncle, and April's not in it much at all. For me it was a pleasant diversion but not a book I couldn't put down. There was one scene, which I can't reveal, that I felt rang false and if the bods from CSI or Dr Brennan from Bones had been around then the story could have moved a little quicker.

As an experience crime fiction reader (and tv viewer) this didn't really grab me but I'd love to hear from younger readers about what they thought of it. I will read the next book as I'm expecting that to be more courtroom based than this was.

NB. As before, there are both adult and YA editions.
Posted by Karen (Euro Crime) at 13:38