Much the same as last week, in composition if not content. My camera is out of action so I'm borrowing pictures and descriptions off Waterstone's. 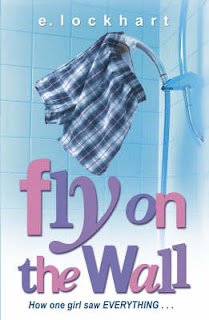 Fly on the Wall by E Lockhart
At the Manhattan School for Arts, where everyone is 'different' and everyone is 'special', Gretchen Yee feels ordinary. She sits alone at lunch, drawing pictures of spider-man, so she won't have to talk to anyone; has a crush on Titus but won't do anything about it and has no one to hang out with when her best (and only real) friend Katya is busy. One day, Gretchen wishes that she could be a fly on the wall in the boys' locker room - just to learn more about guys. What are they really like? What are they really cretins most of the time? "Fly on the Wall" is the story of how that wish comes true.

(I couldn't resist starting this one on the train home last night!)

Tuck - King Raven Trilogy Bk. 3 by Stephen R Lawhead (out 4 Feb)
Driven from their ancestral homeland, outlaw Rhi Bran and his band have made their home in the forest of the March, and are feared by all for their unrivalled skill with the longbow. But they cannot hide forever. Bold action is required, and they are willing to die in order to win peace for the people of Elfael. Bran's companions include the mighty champion Iwan, skilled forester Will Scarlet, rough-and-ready priest Friar Tuck and, new to the band, vagabond minstrel Alan a'Dale. Together they have constructed a desperate plan to rid themselves of the barbarous Ffreinc, led by the malevolent Abbot Hugo and Guy of Gysburne. Severely outnumbered, the band must rely on their wits, their intimate knowledge of the forest, and all their fighting prowess if they are to prevail.

(I haven't read the previous two, I don't tend to read fantasy much but I like Merlin, Robin Hood (the old series with Michael Praed et al) so...)

"Doctor Who": The Writer's Tale: the Final Chapter by Russell T Davies and Benjamin Cook
For this new edition of "The Writer's Tale", Russell T Davies and Benjamin Cook expand their in-depth discussion of the creative life of 'Doctor Who' to cover Russell's final year as head writer and executive producer of the show, as well as his work behind the increasingly successful "Torchwood" and "The Sarah Jane Adventures" spin-offs. Candid and witty insights abound throughout two years' worth of correspondence, covering David Tennant's last episodes as the Doctor and the legacy that Russell and David leave behind as a new era of "Doctor Who" begins. With over 300 pages of new material, and taking in events from the entire five years since the show's return in 2005, "The Writer's Tale: The Final Chapter" is the most comprehensive - and personal - account of "Doctor Who" ever published.

(I loved the first edition and am so pleased to have won this one off The Medium is not Enough tv blog)
Posted by Karen (Euro Crime) at 13:41