Actually, there's no library loot this week as I've not been into work but I did receive a prize from Quercus of Betrayals by Lili St Crow: 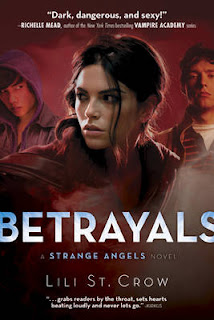 The second novel in the Strange Angels series picks up with Dru neatly tucked away in a Schola that's more like a prison than a secret training facility. Except for one tiny detail ...she's the only girl in the place and is totally surrounded by tons of cute boys. But a traitor in the Order wants Dru dead and she can't trust anyone except for Graves. Too bad he's being kept busy with a new crew of wulfen teens and doesn't have time for her. As she learns the truth about who she can and can't trust, Dru's only hope may be to save herself - although the one gift that makes her special is draining away, and she doesn't know how to get it back. Will Dru survive long enough to find out who is really after her? Or is she destined for the same fate as her murdered parents? Lili's characters come alive on the page in a way that's visually stunning and she creates the same terrific pace, danger and teen romance as in Strange Angels.
Posted by Karen (Euro Crime) at 14:32