This week's there's one library book, one review copy and one prize: 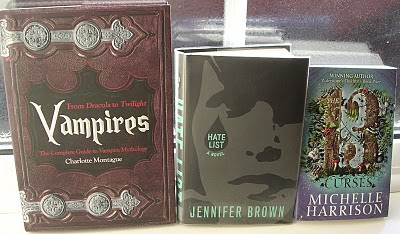 Five months ago, Valerie Leftman's boyfriend opened fire on their school cafeteria, killing five students and one teacher before turning the gun on himself. Valerie, who was shot trying to stop him, is initially implicated in the shootings because of the hate list she helped create. The hate list her boyfriend used to pick his targets. As Valerie integrates back into school, more of an outsider than she ever thought she was before, she is forced to confront her feelings of guilt and loneliness. Exploring the gray area between hero and villain, she navigates the rocky relationships with her family, her former friends, with the memory of the boyfriend she still loves, and with the girl whose life she saved five months ago. As she moves toward graduation and the year anniversary of the shooting, Valerie must come to grips with the tragedy that took place and her role in it all in order to make amends and move on with her life.

Vampires: From Dracula to Twilight - The Complete Guide to Vampire Mythology by Charlotte Montague (4 March, Sphere)

In the West the vampire myth is widely thought to have been based on the life of Vlad the Impaler, a 15th century Wallachian warrior-prince whose devotion to cruelty and killing made the lives of his subjects miserable, bloody and short. However, bloodsuckers of all shapes and sizes feature in many cultures. The most famous of these is the chupacabra, or 'goat killer', a creature that is rumoured to have attacked and mutilated as many as 2,000 animals in Puerto Rico and Latin America. The chupacabra is variously described as half alien, half tail-less dinosaur with quills running down its back, a panther with a long serpent's tongue and a hopping animal that leaves an unbearable sulphurous stench in its wake. Whatever his form, one thing is for sure, the chupacabra shares little with his dark-cloaked, virgin-biting, garlic-hating, European cousin, apart from his lust for blood. VAMPIRES explores these diverse myths and legends, their impact upon popular culture and the possible explanations behind such phenomena.

The Thirteen Curses by Michelle Harrison

The Thirteen Treasures have become the Thirteen Curses. When fairies stole her brother, Red vowed to get him back. Now trapped in the fairy realm, she begs an audience with the fairy court where she strikes a bargain. Her brother will be returned - but only if she can find the thirteen charms of Tanya's bracelet that have been scattered in the human world. Returning to Elvesden Manor, Red is assisted by Tanya and Fabian and a desperate hunt begins. Soon they make a shocking discovery. The charms now have twisted qualities of the thirteen treasures they represent...and the longer they are missing the worse the consequences will be. Can Red, Tanya and Fabian find all the charms? And even if they do, will the fairies keep their promise?