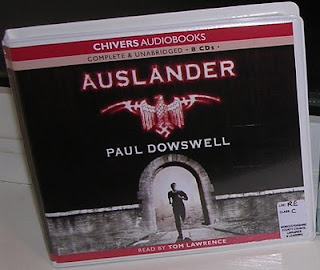 First Line:
Piotr Bruck shivered in the cold as he waited with twenty or so other naked boys in the long draughty corridor.

Notes: Auslander was shortlisted for the Booktrust Teenage Prize 2009.

Review: Auslander covers two years in the life of Piotr/Peter Bruck from August 1941 - 1943. Piotr lives in Poland and in an orphanage. The occupying Germans examine the orphans and seek out those with German blood to be reclaimed by Germany. Piotr has German heritage and is a perfect Aryan specimen of the Nordic variety, so he is sent to Berlin where he becomes Peter and is fostered by a prominent German family. Peter has to forget his Polish ways and become absorbed into German culture but it is not an easy task and Peter's personality soon begins to set him on a dangerous course.

Auslander is not an easy listen as we are given a detailed look at the everyday life of Germans under the Nazi regime. Politics is obviously prominent but is part of all aspects of life ranging from a modified Christmas Carol praising Hitler to school examination questions asking how many homes could be built for the price of one lunatic asylum. As Peter gets into more dangerous situations the full horror of what is going on in Germany becomes clear. The tension of what is going to happen to him and his friends becomes almost unbearable.

Auslander proceeds quite steadily but picks up pace towards the end and has a gut-wrenchingly taut last couple of disks. Perhaps more importantly it allows its readers an accessible look at Germany during the Second World War as seen by an incomer, an Auslander, the young Peter who is Polish by upbringing if not by birth.

Cover: The audiobook and hardback edition have the same cover showing Peter on the run.
Posted by Karen (Euro Crime) at 11:59