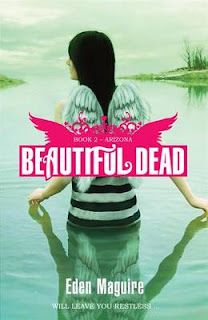 Review: Arizona is the second part in a four-book series which began earlier this year with Jonas. Four teenagers have died in mysterious circumstances: Jonas, Arizona, Summer and Phoenix and they have become the Beautiful Dead. They have been sent back to the 'far side' ie the land of the living to resolve what happened to them so that they can successfully pass to the other side. They have a year from the day of their death, to resolve their issues but must remain in hiding. When the year's coming to an end and they are getting nowhere, they call in Darina, Phoenix's girlfriend who'll do anything to spend time with her (dead) boyfriend.

It's Arizona's turn this time. She drowned in a lake but cannot believe she committed suicide and she cannot remember why she would have been at the lake at all, especially in the winter. Arizona appears to be the typical stuck-up fashion plate with few close friends but she is hiding some big secrets. Darina is called in to investigate and her nosing around Arizona's family and boyfriend gets her into plenty of trouble and not a little danger. Meanwhile keeping secrets from her own family and friends makes her life more difficult and stressful.

I enjoyed Jonas very much and was eager for Arizona and I wasn't disappointed. It's a very smooth read which holds the interest completely; the who or what is behind Arizona's death keeps changing as more information is revealed. The author gives more of a reason for the strong bond between Phoenix and Darina, even though they had only been together for a short while before his death. Darina's current situation puts a great strain on her which is reflected in the off-hand way she treats those around her, with the exception of Phoenix. Her relationship with him, though completely understandable, is not in her best interests really - I do wonder how it will be resolved. The setting is well evoked and I can really visualise the town and especially the open country where much of the action takes place.

Arizona follows a similar format to Jonas and if you enjoyed Jonas then you'll enjoy Arizona. This series has a pleasing combination of crime, romance and the supernatural.

Cover: The cover is a very accurate depiction of a scene in the book and I love the look this series has. Very spooky.

My review of Jonas is here.