Library Loot (23) and a review copy

My local library has had an influx of new books. It will be shut throughout January for the final stage of its refurbishment - I feel sorry for those people who won't have access to a library for a month. I'm fortunate enough to work in another library service.
Summaries are from amazon.co.uk:

Ice by Sarah Beth Durst
When Cassie was little her grandmother would tell her stories about the Arctic...stories about snow and ice, about a beautiful castle made of ice, and about her mother, who made a deal with the Polar Bear King and was swept away to the ends of the earth to become a prisoner of the trolls. Cassie is older now and has no time for fairytales and talking animals, or lies about her dead mother. Living with her father at the Arctic research centre, she is determined to become a leading scientist and researcher. But when Cassie comes face to face with a mysterious polar bear, one that defies all scientific fact or knowledge, she begins realise that the fairytales could actually be true. Armed with the knowledge that her mother might be alive, Cassie makes a deal with the Polar Bear King, and embarks on a dangerous journey against time to save her. But her agreement with the Polar Bear King comes with consequences she never bargained for, and before her journey's end Cassie will discover the true meaning of love and family, and loss. A compelling romantic fantasy set in the beautiful frozen Arctic.

Death by Bikini by Linda Gerber
Aphra Behn Connolly has the type of life most teenage girls envy. She lives on a remote tropical island and spends most of her time eavesdropping on the rich and famous. The problem is that her family's resort allows few opportunities for her to make friends - much less to meet cute boys. When smoldering Seth Mulo arrives with his parents, Aphra's immediately drawn to him. Sure, he's a little bit guarded, and sure his parents are rather cold, and okay he won't say a word about his past, but their chemistry is undeniable. Then a famous rock star's girlfriend turns up dead on the beach - strangled by her own bikini top - and alarm bells sound. Is it too great a coincidence that Seth's family turned up just one day before a murder? As the plot thickens, Aphra finds that danger lurks behind even the most unexpected of faces .....

Special Powers by Mary Hoffman
Emily feels that everything about her is boring, her name, her looks, her life. The only interesting bit is the fantasy world she creates in her head, the desert kingdom of Krin, where she rules as Queen K'sendra. But Emily is transformed into Emma Leigh when the glamorous Power family come to town and with a change of name comes a whole new life. When the local library is threatened with closure, Emma Leigh and her new friends lead the campaign against the closure. It is very exciting but Emma Leigh begins to suspect that the Power family are not quite who they claim to be. An adventure story of life between two worlds that will carry the reader along with enthusiasm.

Evermore by Alyson Noel
Seventeen-year-old Ever is the sole survivor of a car crash that killed her entire family. Living with her aunt in Southern California, she's plagued by the ability to hear the thoughts of those around her, and haunted by the ghost of her little sister. She tries to tune everyone out, shunning her old lifestyle as the pretty, popular cheerleader, but somehow she can't hide from Damen, the new guy at school. Stunningly handsome, clever and not a little bit intimidating, there's something about him that doesn't quite add up. Ever realises he's hiding something, but nothing could prepare her for the truth - especially when the truth involves past lives, murderous enemies, everlasting love and the secret of eternal youth . . .

Betrayals by Lili St Crow
The second novel in the Strange Angels series picks up with Dru neatly tucked away in a Schola that's more like a prison than a secret training facility. Except for one tiny detail ...she's the only girl in the place and is totally surrounded by tons of cute boys. But a traitor in the Order wants Dru dead and she can't trust anyone except for Graves. Too bad he's being kept busy with a new crew of wulfen teens and doesn't have time for her. As she learns the truth about who she can and can't trust, Dru's only hope may be to save herself - although the one gift that makes her special is draining away, and she doesn't know how to get it back. Will Dru survive long enough to find out who is really after her? Or is she destined for the same fate as her murdered parents? Lili's characters come alive on the page in a way that's visually stunning and she creates the same terrific pace, danger and teen romance as in Strange Angels.
Legend - John Brindley
Seventeen-year-old Blake used to be a star runner. Now he's a has-been. On a school trip, he has the opportunity to secure the answer to his prayers - a specially created serum that will restore him to physical supremacy. But does he steal it or not? Before he - and the reader - knows, Blake is transported into another dimension where evolution has run wild and where he is perceived as a hero by the beautiful, enigmatic mermaid creature, Chimera. He escapes and returns to his own world - our world - to face the consequences of his alleged theft. Can he prove his innocence? Not without returning to that strange new world and the even stranger but alluring Chimera ... LEGEND is a gripping and thought-provoking thriller about the blurring of physical and emotional boundaries in the quest for the truth. 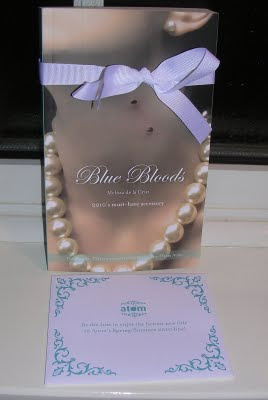 (the invite was tied on with the ribbon)

Blue Bloods by Melissa de la Cruz (March 2010)
They're Young, Fabulous and Fanged...And they rule Manhattan from the trendy uptown clubs to the downtown boutiques. Fifteen-year-old Schuyler Van Alen has never quite fit in at her exclusive prep school - she's more of a vintage than a Versace girl - but all that's about to change...Because Schuyler has just found out she's a Blue Blood. The Blue Bloods are the city's glamorous - and secret - vampire elite. They're young, beautiful and powerful. But now they're being murdered. And Schuyler must find out who - or what - is behind it before she's next.

March also sees the UK release of Masquerade and April sees Revelations and The Van Alen Legacy.
Posted by Karen (Euro Crime) at 16:50