Having just finished Eden Maguire's Beautiful Dead: Arizona, I now have to wait until May for the next instalment, Summer: 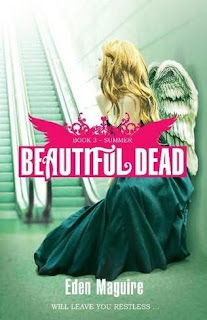 Six months have passed sine the last Ellerton teenager died, but Darina is still traumatized by the stabbing of her own beloved Phoenix. But there's work to be done as Darina must now turn her attention to the shooting of Summer Madison -- the beautiful and gifted, singer-song-writer with a heart of gold. It's been nearly a year since the random shooting in a shopping mall caused Summer's meaningless death. Summer left behind recordings of her wonderful songs and a deep sadness amongst high school friends. Now Darina must act as Summer's agent to track down the psychotic killer in a clear search for justice. With the sound of Summer's music constantly playing inside Darina's head, recalling the wonderful months when she was alive and performing her first gigs, Darina, Phoenix and the Beautiful Dead are determined to catch the crazed killer. And all the while Darina's love for Phoenix continues to beat ...

Waiting on Wednesday is hosted by Breaking the Spine.
Posted by Karen (Euro Crime) at 11:54