Not much to talk about this week. The postal strike is holding up some prizes I've won and my local library was shut for a few days, so I've only got the two library books from where I work: 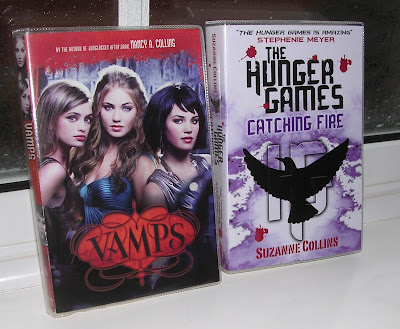 Vamps by Nancy A Collins
When the sun goes down, New York's true elite all head to one place: Bathory Academy, where the young ladies of the finest vampire families are trained in shapeshifting and luring their prey.

Bathory's reigning queen, Lilith Todd, is the daughter of a powerful vampire businessman, and she knows exactly what she wants from life. She wants to look beautiful for eternity and party till the sun comes up with her gorgeous boyfriend, Jules. And she doesn't want any New Blood upstarts standing in her way.

Enter Cally Monture, an unexpected threat from a trash zip code. When their first meeting leads to tragic results, Lilith is hungry for revenge.

Catching Fire by Suzanne Collins
Against all odds, Katniss Everdeen has won the annual Hunger Games with fellow district tribute Peeta Mellark. But it was a victory won by defiance of the Capitol and their harsh rules. Katniss and Peeta should be happy. After all, they have just won for themselves and their families a life of safety and plenty. But there are rumors of rebellion among the subjects, and Katniss and Peeta, to their horror, are the faces of that rebellion. The Capitol is angry. The Capitol wants revenge.
Posted by Karen (Euro Crime) at 08:40