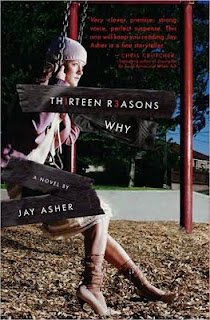 First Lines:
"Sir?" she repeats. "How soon do you want it to get there?"

Review: Clay Jensen receives a mysterious package through the post. When he opens it, he finds seven audio cassettes in a shoe box. When he plays the first tape he is shocked to hear the voice of his dead classmate and crush, Hannah Baker.

Hannah committed suicide two weeks before. Her voice tells Clay that if you are listening to the tape that you're one of the reasons why she took her life. There are thirteen sides and thirteen stories. Why is Clay on the tapes? What had he ever done to hurt her. He hasn't received the tapes in error though as Hannah says that she sent the people mentioned on the tapes, a map before she died. And he has one.

Taking the map and the tapes, Clay borrows a Walkman from a friend and listens and walks and understands how one thing lead to another and culminated in the death of Hannah Baker.

I can't imagine that I'll read a more gripping novel this year. I really didn't want to put it down and even when I did, ie to go to sleep, I was thinking about it. I may as well have given in and read it for all the sleep I got. The tension of finding out who's on the tapes, what they did and Clay's role in the story holds the attention completely.

Thirteen Reasons Why is a very moving book and shows how one thoughtless action can lead to an awful lot of pain. Much like Clay doesn't want the tapes to end and Hannah's voice to disappear I didn't want the book to finish. It leaves the reader with much to think about and will linger in the mind for a long time. I can't recommend it enough.

Cover: The cover is very appropriate and would attract me to pick it up even if I hadn't already heard such a buzz about it.