Deadly Little Secret by Laurie Faria Stolarz will be published in paperback on 19th November. (It was published in hardback in the US last December.) 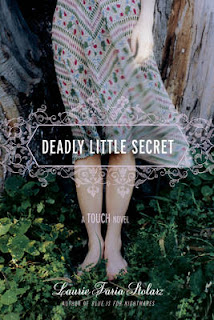 Some secrets shouldn't be kept...

Up until three months ago, everything in sixteen-year-old Camelia's life had been fairly ordinary: decent grades; an okay relationship with her parents; and a pretty cool part-time job at the art studio downtown. But when Ben, the mysterious new guy, starts junior year at her high school, Camelia's life becomes anything but ordinary.

Rumored to be somehow responsible for his ex-girlfriend's accidental death, Ben is immediately ostracized by everyone on campus. Except for Camelia. She's reluctant to believe the rumors, even when her friends try to convince her otherwise. She's inexplicably drawn to Ben...and to his touch. But soon, Camelia is receiving eerie phone calls and strange packages with threatening notes. Ben insists she is in danger, and that he can help--but can he be trusted? She knows he's hiding something... but he's not the only one with a secret.