Review: Back to Life by Joanna Nadin 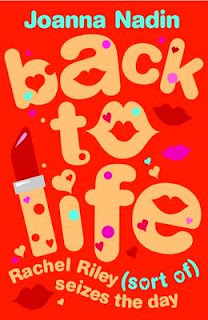 First Lines:
Tuesday 1
New Year's Day
This is utterly the worst start to a New Year ever.

Review: This is the fifth of Rachel Riley's diaries to be published and covers January to mid-July 2008.

Rachel is sixteen and lives in Saffron Walden with her parents and younger brother and (unnamed) dog and attends John Major High. Rachel's household is described as returning to normal after the festive guests have left:

"Just the click-click of James Googling frenetically, the 'psshhht' of Mum Cillit Banging the suspicious ring off the bath, and the 'tap, clonk, "bugger"' of Dad trying to putt practice balls into an Ovaltine jar and hitting the DVD player instead."

Rachel's first best friend is Scarlet and second best friend is Sad Ed. The diary records Rachel's adventures or mostly misadventures as she tries to stick to her New Year's resolutions which include telling the truth at all times and experimental snogging to try and find the ONE, along with: her brother's attempts to be a gladiator (tv style), her middle-aged parents' role in the Saffron Walden Amateur Operatic Society's production of Grease, Scarlet's long distance relationship with Hilary (potential first black Prime Minister) and the search for Sad Ed's mojo and much, much more...

Back to Life is extremely funny and will lead to laughing out loud on public transport. Though some of the events that occur tend towards the surreal I was still left with the feeling that Rachel and her family and friends exist and that if I was to go to Saffron Walden on a Saturday I'd find her at work in Nuts in May (at least before she was sacked). The diary includes references to recent events which also add to the real-life feel to it. This is the first in the series that I've read but it won't be the last. It didn't matter greatly that I hadn't read the earlier books (though there were a couple of characters that puzzled me) but it probably adds to the enjoyment if you have. I found this a quick, amusing and light read; the perfect antidote to this miserable summer weather.

NB. The cover warns that the book is not for younger readers as it is a bit too rude.

Find out more at the Rachel Riley website where you can download the first chapter of Back to Life.

Cover: Attractive cover which is a darker red in real life than appears on my monitor (and is shiny!).
Posted by Karen (Euro Crime) at 09:42