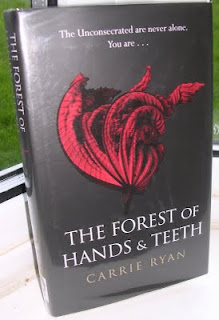 So I've currently got *the* copy of The Forest of Hands & Teeth by Carrie Ryan in the Birmingham library system. Long waiting list so I'll be bumping this to almost the top.

Synopsis from amazon:
In Mary's world there are simple truths. The Sisterhood always knows best. The Guardians will protect and serve. The Unconsecrated will never relent. And you must always mind the fence that surrounds the village; the fence that protects the village from the Forest of Hands and Teeth. But, slowly, Mary's truths are failing her. She's learning things she never wanted to know about the Sisterhood and its secrets, and the Guardians and their power, and about the Unconsecrated and their relentlessness. When the fence is breached and her world is thrown into chaos, she must choose between her village and her future-between the one she loves and the one who loves her. And she must face the truth about the Forest of Hands and Teeth. Could there be life outside a world surrounded in so much death?

for review from Atom: 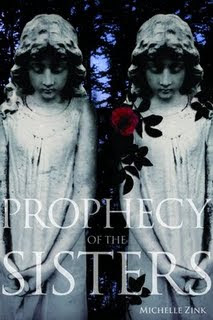 Synopsis from amazon:
Without the Keys, something terrible will happen. Something that cannot be undone. And with them, I might bring an end to the riddle of the Prophecy and my strange part in it. If Alice and I are on conflicting sides of the Prophecy, the Keys would be dangerous in her hands. Which means I have to find them. And I have to do it before my sister.' This is the story of sixteen-year-old Lia Milthorpe's quest to discover her role and her twin sister's in a powerful prophecy that has affected twin sisters for generations. But nothing can prepare her for what she discovers - about herself, about her family, and about the danger that goes from haunting her dreams to becoming her reality.

and a prize from Simon & Schuster:

Synopsis from amazon:
Nick and his brother Alan are on the run with their mother, who was once the lover of a powerful magician. When she left him, she stole an important charm - and he will stop at nothing to reclaim it. Now Alan has been marked with the sign of death by the magician's demon, and only Nick can save him. But to do so he must face those he has fled from all his life - the magicians - and kill them. So the hunted becomes the hunter...but in saving his brother, Nick discovers something that will unravel his whole past...
Posted by Karen (Euro Crime) at 13:29