I had to resort to using the bed this week to spread my new books out: 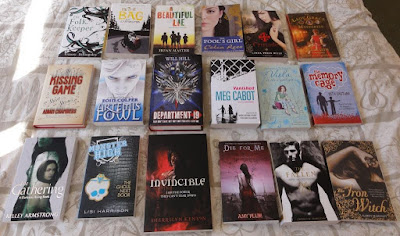 Assassin by Grace Cavendish (This is one is for my children's reading group who are in the 9-12 year range. We are doing Tudor mystery/crime/adventure next). This is a popular series but the library has very few copies left of some of the titles. Conveniently the titles follow the alphabet. Loot is the latest title I believe.)
Since the death of her beloved mother, Lady Grace has become the Queen's favourite Maid of Honour. But even favourites have to obey the Queen's wishes - and the Queen wants Grace to be married. Choosing between her suitors – kindly old Sir Charles, flashy Sir Gerald and sweet, anxious Lord Robert – is easy for Grace: she doesn't want to marry any of them! When Gerald is found dead after the ball at which Grace should have picked her favourite suitor, suspicion falls on Lord Robert. But Grace has noticed that Sir Charles has been acting strangely – and that there is something odd about the body. With her friends Ellie the maid and Masou the acrobat, Lady Grace sets out to discover what really went on that night.

The Memory Cage by Ruth Eastham
Alex's grandfather keeps forgetting things, and Alex has overheard his adoptive parents say that they're going to put granddad in a home. His grandfather begs Alex to save him from that, and it's a promise Alex is desperate to keep But Alex once promised his little brother that he would save him, and in the terror of the Bosnian war, he failed As Alex struggles to protect his grandfather, he uncovers secrets that his family and the village have kept for two generations.nravelling them will cause grief, but will they save grandfather, and perhaps help Alex come to terms with his own private war.

That's what they call seventeen-year-old Donna Underwood at Ironbridge High School. A horrific fey attack that killed her father when she was just a child left Donna branded with iron tattoos that cover her hands and arms - and magically enhanced strength, that she now does all she can to hide.

Now, after ten years of wishing for a normal life, Donna finally accepts her role in the centuries-old war against the darkest outcasts of Faerie - the dark elves. Aided by Xan, a gorgeous half-fey dropout, Donna must save her best friend's life - and that means betraying one of the world's greatest secrets and confronting the very thing that destroyed her family.

The Kissing Game by Aidan Chambers (Won from Random House's Librarian's Newsletter)
From the master storyteller, Aidan Chambers, comes a collection of Stories of Defiance - moments in life, realizations, insights and sudden revelations - prepare to be amazed, enchanted and to gasp with shock.

United under the banner of flash fiction, this is a collection of stories, or little 'cells', complete in themselves but connected by the overarching themes of betrayal and revenge. All featuring teenagers and often with an unexpected twist, these frighteningly realistic stories will take you to the very edge and beyond.

There are too many to put all the synopses, so links go to amazon.co.uk

I couldn't go the launch but they kindly sent me a review copy of Department 19 by Will Hill out 31 March.
From Puffin

Artemis Fowl by Eoin Colfer (7th April) (I've been thinking about covering Artemis Fowl in the children's reading group soon, so this has decided it for me!)
From Simon & Schuster

Vanished: When Lightning Strikes & Code Name Cassandra by Meg Cabot (31st March) (I read these a few years ago but I have a few notes I can type up. Recommended series!)
The Fallen: Aerie & Reckoning by Thomas E. Sniegoski (28th April)
Viola in the Spotlight by Adriana Trigiani (31st March) So pleased to get this one as I really liked #1
With thanks to the above publishers.
Posted by Karen (Euro Crime) at 19:07