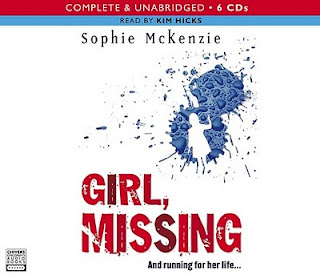 First Line:
Who am I?

Review: As the sequel to Girl, Missing - Sister, Missing - is due out in September I thought I'd better get on and read the first book.

Girl, Missing is the story of Lauren Matthews who was adopted when she was three. Her parents refuse to tell her about her life before then saying that she's not old enough to know more yet as she is only fourteen. Naturally Lauren doesn't agree and a routine homework assignment on "Who am I?" turns into something more serious when she finds a missing children website. Lauren discovers that a girl, middle name Lauren, disappeared at the right age over in America. Could she be the same person?

Her investigations of family documents leads to the name of a US adoption agency on the East coast of America. Lauren manipulates and lies to get a family holiday in the right part of the US and is fortunate to be accompanied by her best friend Jam (James). Lauren's quest to find herself leads to much more than she bargained for with multiple life-threatening situations and much stress and strain for her adoptive parents.

Girl, Missing is an exciting thriller with a headstrong, teenage lead who comes across as selfish and thoughtless at times but is probably only acting as anyone would at that age when something so important is almost within your grasp. The story raises serious issues of who is family and how much blood-ties matter, along with being a gripping, thriller. I did enjoy it and am intrigued to see how Lauren will have matured as the next book is set two years later.

Girl, Missing is well narrated by Kim Hicks who gives Lauren a confident voice which may make her sound more selfish than she actually is. You can listen to a sample of the opening chapter on the AudioGO website.