Review: When You Reach Me by Rebecca Stead 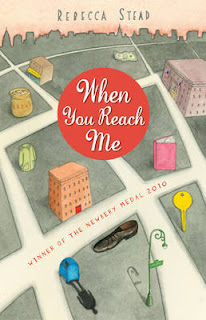 First Line: So Mom got the postcard today.

Review: When You Reach Me has won a whole host of awards in the US, including The Newbery Medal 2010, and I couldn't put it down.

When You Reach Me is set in the last two years of the 1970s. Twelve-year-old Miranda lives with her mum in an apartment in New York and they live above the flat of Miranda's best friend Sal. Miranda and Sal have been walking to school together for forever but when a boy attacks Sal on the way home, Sal begins to avoid Miranda. Then Miranda's spare key is stolen and then the most strange thing of all: a peculiar note appears in her knapsack telling her that the writer is coming to save her friend's life but that Miranda must write him/her a letter detailing all that has happened up to this point and also include the information as to where her spare key is kept.

Miranda is frightened now, but carries on with her usual life, except that the tiff with Sal means she gets to make new friends and also speak occasionally to the odd boy who punched Sal - Marcus. As well as school-life, Miranda helps her mum prepare to go on a game-show to win $20,000. Two more notes appear at intervals, and seem to provide proof for something incredible. Miranda wonders what she must do to prevent the harm to her friend and which of her friends is in danger?

I adored When You Reach Me and I'm trying not to give anything away about the premise. It's a real mystery, with the "what's going on with these notes" factor pulling you from one short chapter to the next. Miranda is a likeable lead who is starting to discover boys and maturing in other ways, such as becoming more considerate of others' feelings. At less than 200 pages, every word counts and though you only spend a few months with Miranda and her family, by the end of the book you feel that you know their future lives as well, which is rather comforting. I can't wait to see what Rebecca Stead writes next.

NB: The cover is brilliant showing many of the key places and items which are integral to the story.
Posted by Karen (Euro Crime) at 20:07

Labels: Rebecca Stead, review, When You Reach Me