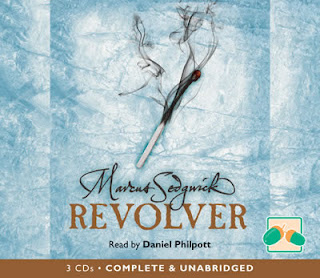 Review: Revolver is narrated by Sig Andersson who has been living with his sister, dad and step-mother in Giron (Kiruna) in northern Sweden where his dad works for the mining company in an office job. It is Winter 1910 and bitterly cold and the lake outside is frozen but Sig's dad Einar has inexplicably driven to their home across it even though he'd said never to do so as the ice is thinner in some places. By not following his own advice, he falls through a weak patch into the freezing water below. He manages to get back on to the ice but cannot save himself from hypothermia. It is Sig who finds his father's body and it's Sig who is left with the body when the women-folk go to the town for help. While Sig waits he receives a visitor who will change his life...

Interspersed with the 1910 chapters are chapters from 1899 when the family, at this point Sig's mum is still alive, are stranded in the Alaskan town of Nome. They have gone there to find gold, but there's none to be found and Einar and the family are lucky to survive.

And then there's the revolver, which is Einar's prized possession and which makes an appearance in all parts of the story.

Revolver is only three CDs long and yet there is so much packed in. There's not a wasted word and is extremely well plotted - with all that you've heard before, proving crucial to the final resolution. I could see this as a stage play, as much takes place in just one room, albeit a room with a thawing body in it. The Arctic setting is well conveyed and Sig is a likeable, resourceful character. This is a thought-provoking read which, unsurprisingly, was short-listed for the Carnegie Medal 2010.

Daniel Philpott's narration is very enjoyable too with distinct and appropriate voices for all the characters.
Posted by Karen (Euro Crime) at 08:21