Killer Strangelets is the first in the ARCTIC 6 trilogy by C T Furlong and came out on 1 June from independent publisher Inside Pocket. 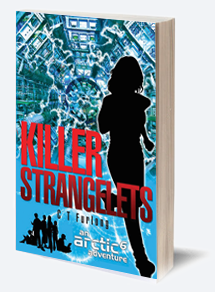 The first of three ARCTIC 6 adventures for teenage readers. This adrenaline packed thriller follows the exploits of the fifteen year old Iago, his cousins, Cam, Tara and Renny, and his younger sister, Aretha. Joined by their friend, the bewitching Charlie, they embark on a mission to save Iago's father who has been accidentally kidnapped - by perhaps the maddest of all possible mad scientists.

'How can I, Iago Johnson, a) know anything about the fate of the universe and, b) be in any kind of position to change it..? I am not a superhero, I'm not a genius. I'm not even very good at science... `

Forced to take action, the A.R.C.T.I.C. 6 embark on their first mission!

The intended kidnap victim: not Iago's father but his uncle, Jonas, a scientist involved with the Large Hadron Collider (LHC) project at CERN - the European Centre for Nuclear Research in Switzerland, where he has been testing Big-Bang theory.

An Old Nemesis: Katherina Kreng has used the LHC to create matter-annihilating particles - the Killer Strangelets - which could gobble up the planet!

The Solution: an emergency shutdown device hidden somewhere inside the long LHC tunnel, deep beneath the Swiss mountains.

The Problem: Only Jonas knows where it is, and he can't get to it!

Watch the trailer, below: