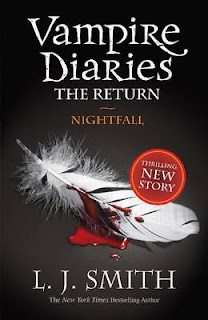 First Lines:
Ste-fan?
Elena was frustrated. She couldn't make the mind-word come out the way she wanted.

Review: My reviews of the first four books in the Vampire Diaries can be found here. This review may contain spoilers of these earlier books.

Though published 18 years after the first book in the series, The Awakening, the events in Nightfall take place a week after the ending of The Reunion. The gang's all here: Stefan and Damon, Elena, Meredith, Bonnie and Matt. Elena is alive again but at least to start with she's not quite human: she cannot speak and floats! Elena's former close friend Caroline is also not quite herself and Elena and Bonnie's psychic tendencies can sense something dark inside and even Damon is not immune and starts acting even more careless of human life than usual.

It seems something awful has been drawn to Fell's Church with the ultimate aim of destroying the town. When Stefan disappears it's up to Elena and her friends to rescue the town (again) - and where does Damon stand - is he friend or foe?

I really enjoyed Nightfall. It's great to have Damon back..I mean Elena. Damon is the character you cannot predict and that's a lot of the excitement. Sensibly, level-headed but not terribly exciting Stefan is written out for half of the book. Elena is a more likeable character than in the first series and Meredith is equally strong as before, though Bonnie is perhaps more of a scaredy-cat than I remembered and it's Elena whose character develops most through this book. The gang has some nasty enemies this time and there are a few scenes of mild torture, which along with more overt sexual references than in the first series, make this possibly aimed at a slightly older audience than before.

Nightfall is set in the current day, with references to mobile phones (no more summoning spells) and the internet. There are a lot of dead signal areas in Fell's Church though. The story feels smoothly continued from before, the writing is better - though there are a few scenes and repeated phrases which are squirm inducing - and I feel it contains a lot more humour in it, especially from Damon. Despite a complicated, sometimes confusing plot, it did seem to drag a little in the middle (it is 471 pages) but has a gripping final fifty pages. I can't wait to read Shadow Souls.

(I am watching the tv series and even though my copy hasn't got the tv actors on the front I couldn't help but picture Damon and Stefan, and Matt as they are in the show. Not so for Elena as she is golden haired in the book and dark on the screen.)