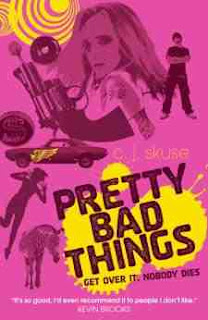 Simpson fumbled getting the tape into the VCR. She was all, Which button is it?

Review: Pretty Bad Things is the story of twins, Beau and Paisley Argent. When they were six they came home from school to find their mother dead. They then went to find their dad but got lost in the nearby woods and weren't found for three days. When they were, they were nicknamed the Wonder Twins. Their dad, struggling to make ends meet and wanting a better life for his family turned to crime and was caught. The twins were then left in the care of their maternal grandmother, former soap-star,Virginia. Virginia got the twins on talk-shows and even doing commercials and the money poured in. Unfortunately the twins didn't see any of it. Ten years later, Paisley is expelled from her fifth boarding-school for bad behaviour and Beau is a nervous, bookish young man who is constantly bullied.

To make things right, Paisley believes they must find their dad whose last known address is near Las Vegas and so the twins set off in spectacular style to find their dad. But it's not as easy as they thought it would be and they decide to turn to a life of crime to get what they want.

Pretty Bad Things is a noir-ish tale of failed parents and guardians whose impact on their two charges has left them both damaged, in different ways. Paisley is the strong one, who will do whatever it takes whereas Beau will follow her lead. Through the time they spend together, a time that takes their thoughts back to their childhood, the relationship changes but the bond remains the same. The twins take the reader on a tour of a vividly realised Las Vegas - both casinos and sweet shops - before family members reappear and a final showdown paves the way for the twins' future.

Pretty Bad Things was not was I was expecting, I found it quite dark in tone and potential readers should be aware it contains strong language, violence, attempted rape and other sexual content. Incidentally, the author is British but to my eyes at least, this reads as if written by an American.
Posted by Karen (Euro Crime) at 10:30