A couple more library books added to my reading pile this week: 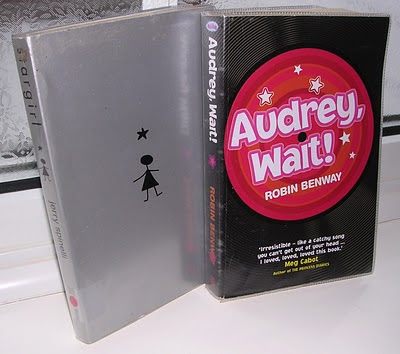 Audrey Cutler is a normal Southern California girl. OK, her cat is overweight, but her best friend is awesome, and her parents might be hippies, but they adore her - because Audrey is funny, charming, and she likes her music loud.
So she struggles with dumping her musician boyfriend, Evan. She loves his band, but he's just too self-involved. Audrey needs to move on.
Then at one of Evan's gigs, Audrey gets to hear their brand new single and moving on doesn't seem so easy now: the song is called Audrey, Wait and it's all about her, and not in a good way ... The song storms quickly up the charts and reaches the top. Suddenly everyone wants to know: who is Audrey? The media is all over her like a rash, and what started out as annoying is becoming a nightmare!
On top of this, it is ruining her chances with James, her colleague at Scooper Dooper ice cream parlour. Audrey's life is veering out of control and there's only one thing for it. She's going to have to stand up and tell the world her side of the story ...

Stargirl by Jerry Spinelli
She’s as magical as the desert sky. As mysterious as her own name. Nobody knows who she is or where she’s from. But everyone loves her for being different. And she captures Leo’s heart with just one smile. STARGIRL is a classic of our time that celebrates being true to ourselves and the thrill of first love. A life-changing read that touches souls of all ages.
Posted by Karen (Euro Crime) at 10:38