Review: Never Bite a Boy on the First Date by Tamara Summers 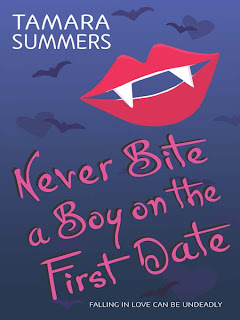 First Line:
Prologue
If you were dying...

Review: Kira November has been sixteen for a year and a half now and she wasn't originally called Kira. Her old life ended in a hit and run accident and her new life as a vampire began when she was saved by her new family.

As Kira is very new to being a vampire, she makes mistakes and the family has had to move town a couple of times. It's not surprising then, that when one of her new school colleagues is found dead, killed by a vampire, that suspicion falls on her. She has a week to prove it wasn't her before being locked up in a padded coffin for a few hundred years.

Kira has to investigate and she thinks the killer is one of three boys that have caught her attention by their suspicious behaviour. She has to get close to them and see what she can find out.

I really enjoyed reading Never Bite a Boy on the First Date. It's light and funny and Kira is a likeable lead character (and a fan of Buffy and Veronica Mars). Her sleuthing duties involve more romance than detection and the identity of the killer was well concealed until the very end. I did think it ended a bit abruptly and would have liked another chapter. Some of the vampire traits such as not having a reflection and inability to be in sunlight are given a different twist and the applying make-up problem is very amusing. The only thing I was surprised with is that Kira can't tell another vampire without checking their pulse (or lack of). Maybe she doesn't have super hearing to go with the super strength.

I read that the author would bring Kira back if there was enough call for it and I for one would love to see her return, along with her extended, bizarre vampire family and new boyfriend.

Cover: I love the cartoon-style cover and think it fits well with the light-hearted story.
Posted by Karen (Euro Crime) at 20:48