So Tuesday was Doctor Who day: 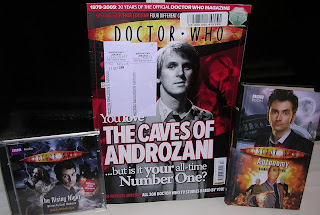 where I brought home the latest Doctor Who magazine and:

The Rising Night written by Scott Handcock and narrated by Michelle Ryan
When Harry Winter goes out collecting rocks to repair the wall around his father's farm, he makes a fatal mistake. He disturbs Lucifer's Tombstone, and awakens something demonic and dreadful...The TARDIS arrives in the 18th Century village of Thornton Rising in the Yorkshire Moors - a village cut off from the world by an all-consuming darkness, where the sun has not risen for three weeks. Farm animals have been attacked, people have gone missing, and strange lights have been seen in the sky. The Doctor soon becomes involved in a nightmarish adventure, helped by a young local woman named Charity. But who is feeding on the blood of the locals, and where will the carnage stop...?

Autonomy by Daniel Blythe
Hyperville is 2013's top hi-tech, 24-hour entertainment complex - a sprawling palace of fun under one massive roof. You can go shopping, or experience the excitement of Doomcastle, Winterland, or Wild West World. But things are about to get a lot more exciting - and dangerous! What unspeakable horror is lurking on Level Zero of Hyperville? And what will happen when the entire complex goes over to Central Computer Control? 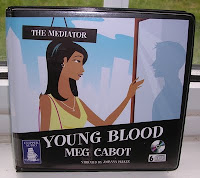 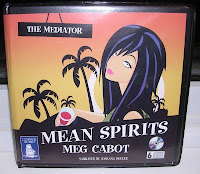 The Mediator (3) - Mean Spirits by Meg Cabot
It's a hot Californian summer and Suze's best friend, Gina, is visiting from New York. All Suze wants to do is check out some cute guvs and compare designer sunglasses with Gina. Unfortunately, being a mediator makes hanging out on the beach like any normal teenager pretty hard. For Suze, unwelcome, ghostly surprises are never more than a heartbeat away...

and The Mediator (4) - Young Blood by Meg Cabot
Suze the ghost-hunter should be spending the summer vacation at the beach. Instead she's been forced to get a babysitting job at a swanky resort. She's expecting to look after some boring brat, but is surprised to find that her charge is actually a budding Mediator - with a totally hot older brother.

Not that Suze's head could be turned by some guy - she's pledged her heart to Jesse, the most gorgeous ghost ever. But it's tough when the boy you love doesn't seem to love you back, and it's even tougher when you think you've found his 150-year-old grave in your back yard...

and today - yet more library books: 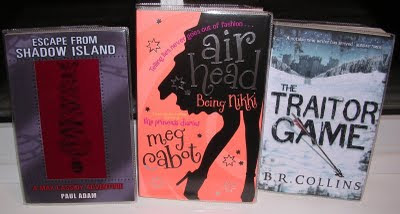 Escape from Shadow Island by Paul Adam
Max is an ordinary north London schoolboy by day, but at night he performs sell-out public shows as an escapologist - nicknamed The Half-Pint Houdini by the tabloid press. His father, Alexander, was also a world-renowned escapologist, who disappeared two years earlier in the Central American state of Santo Domingo. His body was never found, but Max's mother, Helen, was convicted of murdering her husband by a Santo Domingan court. One evening, after his show, Max receives a visit from a mysterious man from Santo Domingo - Lopez-Vega tells Max that his mother's trial was rigged and, if Max comes to his hotel room the following night, he has something to give him.When Max goes to the hotel, he finds Lopez-Vega dead, shot through the head. The room has clearly been searched by the killer, but what was he looking for? By chance, Max finds a piece of paper hidden under Lopez-Vega's wig. Written on the paper is a sequence of eight numbers - 83521113. What do the numbers mean? Are they a code, or maybe the combination for a lock or a safe? Could they be the key to unlocking the mystery of his father's disappearance and getting his mother out of prison?

Airhead Being Nikki by Meg Cabot
Supernerd Emerson Watts is getting to grips with life in the body of Supermodel Nikki Howard, and finding that the celebrity lifestyle is a lot harder than it looks. The bikinis are teensy, the heels are sky-high, and no one seems to care that Nikki's life is on the verge of falling apart. With too many hot men chasing her, and too many big problems to hide, it's up to Em to keep things together - even if her heart is breaking.

The Traitor Game by B R Collins
There was a folded bit of A4 paper wedged into the locker. It said MICHAEL THOMPSON. Michael slid it out, and flipped it open. It said I KNOW WHERE ARCASTER IS. That was when the bottom dropped out of everything. Michael and Francis are best friends at school, drawn together by their common secret - a complete obsession with creating, crafting, adding to and poring over their joint fantasy world, Evgard. Their friendship is put to the severest test when Michael, thinking that Francis has betrayed their world, takes the cold, deliberate decision not to help Francis when Francis is the victim of a brutal attack. Michael then has to see the consequences of his mistake, and confront his own weaknesses. This absolutely compelling charting of the boys' friendship is reflected in the fantasy world, as the fantasy characters and their actions are a clear mirror of the boys' own actions in the real world. With one difference. In the fantasy world, one of the characters does not survive. Each world, both real and fantasy, is just as gripping as the other. 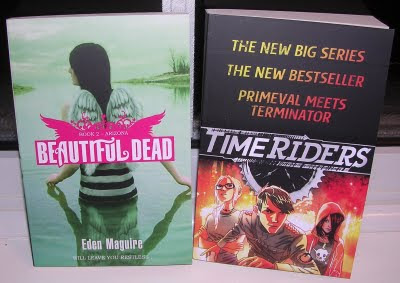 The Beautiful Dead: Arizona by Eden Maguire (published 15 Oct 09 (UK))
There's been no sign of the Beautiful Dead for weeks. Darina achingly misses Phoenix all over again. But surely he will return with the rest of the Beautiful Dead as so much still remains unresolved. It's been ten months since Arizona drowned in Hartmann Lake. Suicide, it would seem. But something doesn't add up. Drowning herself in a hidden-away lake does not sound like strong, confident, Arizona: Ellerton High School's high-maintenance drama queen.

Darina needs to help Arizona the way she helped Jonas. But time is running out ...

TimeRiders by Alex Scarrow (published 4 Feb 2010 (UK))
Liam O’Connor should have died at sea in 1912. Maddy Carter should have died on a plane in 2010. Sal Vikram should have died in a fire in 2029. Yet moments before death, someone mysteriously appeared and said, ‘Take my hand . . .’ But Liam, Maddy and Sal aren’t rescued. They are recruited by an agency that no one knows exists, with only one purpose – to fix broken history. Because time travel is here, and there are those who would go back in time and change the past. That’s why the TimeRiders exist: to protect us. To stop time travel from destroying the world . . .
Posted by Karen (Euro Crime) at 20:42