The UK edition of Tempted by P C and Kristin Cast was published on Tuesday. Tempted is the sixth in the House of Night series which began with Marked. 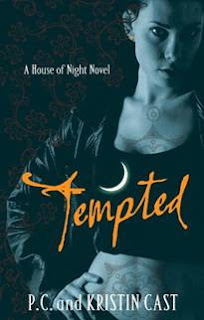 Zoey needs a break after some serious excitement. Sadly, the House of Night school for vampyres doesn't feature breaks on its curriculum - even for a High Priestess in training and her gang. Plus juggling three guys is no stress reliever, especially when one is a sexy Warrior so into protecting Zoey that he's sensing her emotions. Wider stresses lurk too, and the dark force in Tulsa's tunnels is spreading. Could Stevie Rae be responsible for more than a group of misfit fledglings? And Aphrodite's visions warn Zoey to stay away from the immortal Kalona and his dark allure - but they also show that only Zoey can stop him. She's not exactly keen to meet up, but if Zoey don't go to Kalona he'll exact a fiery vengeance on those closest to her. She just has to find the courage to do what's necessary, or everything that's important to her will be destroyed.
(Not suitable for younger readers)