Here's what arrived this week: 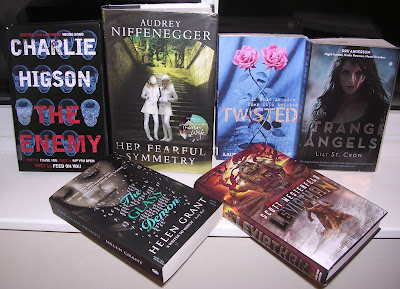 Twisted by Laurie Halse Anderson
17 year old Tyler is totally enjoying his position as high school Alpha male, after years of being 'the geek'. But then Bethany Milbury - rich, blonde, beautiful and the girl Tyler wants - is the victim in a teenage sex scandal, and somehow Tyler is nailed as the prime suspect. Tyler knows he had nothing to do with it, but when everyone - including his hard-nosed father - believes he did, Tyler starts to spiral into a nightmarish, paranoid state of mind. He is desperate to find a way out of the mess he's in...Will he have the courage not to take the easy option?

The Enemy by Charlie Higson
They'll chase you. They'll rip you open. They'll feed on you...When the sickness came, every parent, policeman, politician - every adult - fell ill. The lucky ones died. The others are crazed, confused and hungry. Only children under fourteen remain, and they're fighting to survive. Now there are rumours of a safe place to hide. And so a gang of children begin their quest across London, where all through the city - down alleyways, in deserted houses, underground - the grown-ups lie in wait. But can they make it there - alive?
Her Fearful Symmetry by Audrey Niffenegger
Julia and Valentina Poole are normal American teenagers - normal, at least, for identical 'mirror' twins who have no interest in college or jobs or possibly anything outside their cozy suburban home. But everything changes when they receive notice that an aunt whom they didn't know existed has died and left them her flat in an apartment block overlooking Highgate Cemetery in London. They feel that at last their own lives can begin ...but have no idea that they've been summoned into a tangle of fraying lives, from the obsessive-compulsive crossword setter who lives above them to their aunt's mysterious and elusive lover who lives below them, and even to their aunt herself, who never got over her estrangement from the twins' mother - and who can't even seem to quite leave her flat. With Highgate Cemetery itself a character and echoes of Henry James and Charles Dickens, "Her Fearful Symmetry" is a delicious and deadly twenty-first-century ghost story about Niffenegger's familiar themes of love, loss and identity. It is certain to cement her standing as one of the most singular and remarkable novelists of our time.

Strange Angels by Lili St. Crow
Dru Anderson: Night Hunter. Knife Wielder. Heart Breaker. Dru can sense evil, which helps when she and her Dad are tracking down ghosts, suckers, wulfen, and the occasional reanimated corpse. It's a dangerous life, but it's the only one she knows. Then Dru's dad turns up dead and she suddenly finds herself in the middle of a deadly game where every move she makes could be her last. Dru is more special than she realizes - and whatever killed her dad could be coming for her next. Can Dru stay alive long enough to fall for one - or both - of the guys hungry for her affections? Find out in the heart-stopping first book in a thrilling series.

The Glass Demon by Helen Grant (May 2010, UK) (Synopsis taken from back cover)
The First Death
Seventeen-year-old Lin Fox finds a body in an orchard. As she backs away in horror, she steps on broken glass.
The Second Death
Then blood appears on her doorstep - blood, and broken glass.
The Third Death
Something terrible is found in the cemetery. Shards of broken glass lie by a grave.
Who Will Be Next?
As the attacks become more sinister, Lin doesn't know who to trust. She's getting closer to the truth behind these chilling discoveries, but with each move the danger deepens.
Because someone wants Lin gone - and won't give up until he's got rid of her and her family. Forever.

Leviathan by Scott Westerfeld
The year is 1914 and Europe, armed with futuristic machines and biotechnology, is on the precipice of war. Prince Aleksandar is fleeing for his life, having discovered that his parents have been assassinated and that he is now a target for the Clanker Powers, a group determined to take over the globe with their mechanical machinery. They will stop at nothing to get what they want, so Alek knows his only choice is to keep on running. When he meets Deryn Sharpe, an orphan girl who has disguised herself as a boy so she can to join the British Air Service, they form an uneasy, but necessary, alliance. But the pair will soon discover that their emerging friendship will dramatically change their lives and the entire course of the Great World War...

Never Bite a Boy on the First Date by Tamara Summers
Newly turned vampire Kira has earned a reputation for breaking the rules. So when a student is murdered at her high school, via fang-bite, all fingers point to Kira. But she swears she had nothing to do with it! In order to prove her innocence she has to show her family that there’s another vampire in town. She’s pretty sure it’s one of three new guys who’ve moved in recently—so she goes about dating them all. Dating three cute boys may be fun, but which one is the murdering vampire? And what if he’s the boy she’s falling for...?
Posted by Karen (Euro Crime) at 22:56