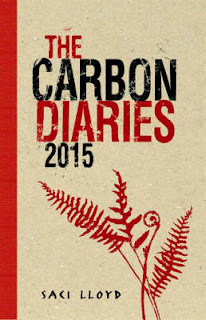 Notes: The Carbon Diaries 2015 was short-listed for the 2008 Costa Children's Award.

Review: It's 2015 and carbon rationing has been introduced to the UK. Each person has 200 units a month and there are penalties if you go over the limit. The diary is written by the youngster Brown family member, Laura, and there are fairly drastic changes ahead for her relatives: her sister Kim cannot now take a gap year travelling around the world, her mum's car sits on the drive and her dad's job teaching travel and tourism is doomed.

The diary recounts the way the family members cope (or don't) with the changes imposed and also the bigger picture of what has happened with the global weather that makes rationing the only way forward to protect the planet. As well as these serious issues, Laura also has the everyday teenage problems of school, fancying the boy next door and playing in a band.

Life becomes tough indeed but there is a glimmer of hope as the book ends...

The Carbon Diaries 2015 is a very thought provoking read and it would make a great discussion book for a multi-generational group. In the book the teenagers feel their parents have messed the world up and ruined their lives, though the parents probably didn't realise that that's what they were doing, and the generation that experienced rationing after the last war have much experience to share.

I was very interested in the concept behind this book and the author creates a very plausible world; I found myself getting tense as things went from bad to worse. I've read several diary format books and this has been by far the most serious but in addition to its environmental theme, it does cover the usual family issues as well.

I'm really looking forward to the sequel, The Carbon Diaries 2017.

Cover: A serious looking cover for a serious subject, though the book is not without humour. The book is appropriately made of 100% recycled material.
Posted by Karen (Euro Crime) at 01:59