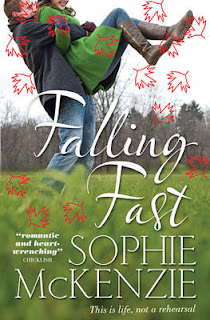 Falling Fast is the first part in the Flynn trilogy which is to be narrated by River; River is 16 and looking to love and be loved. Along with her two best friends Emmi and Grace they go along to a local boys' school to audition for the female roles in Romeo and Juliet. Though River is a better actor than Emmi, when she sets her eyes on Romeo, played by Flynn, she is overcome with emotion and fluffs her test. Emmi secures Juliet and Grace and River get other parts which means that several times a week they have to rehearse with the boys...

Slowly River and Flynn begin a relationship but he is moody and swift to anger and River, though soon deeply in love, is not sure Flynn is her Romeo; what's with all his secrets and his intense personality? Frank discussions are needed if they are to last...

Falling Fast charts a passionate but fragile relationship between the insecure River and the chip on his shoulder Flynn and shows the difference between expectation and reality. It's a quick read but still covers some serious issues. I found River a likeable and believable character. The three girls are quite grown-up what with getting drunk and the varying degrees of experimentation with sex (from none to frequent). There is also an aggressive/frightening scene with some drunks. If you want something along the same lines but more innocent then try Kay Woodward's Wuthering Hearts.

I look forward to seeing where the story goes in the second instalment, Burning Bright. In the meantime you can download  Acting Friends, a prequel, written for World Book Day, here.
Posted by Karen (Euro Crime) at 13:38