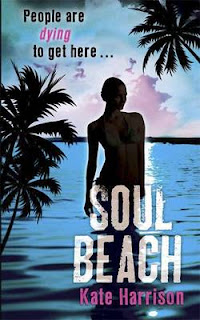 Review: Soul Beach is women's-fiction author Kate Harrison's first foray into the YA market and is the first of a trilogy.

Alice is distraught over the murder of her sister Megan. She and her parents have been through the emotional wringer and the murderer is still at large. On the day of Megan's funeral, Alice receives an email allegedly from her sister...

After some time, Alice follows the link enclosed in the email, which takes her to Soul Beach, not just a social networking site but an apparent virtual paradise for "ghosts" and a place where Alice can talk to her sister again. All the inhabitants of Soul Beach are young and perfect in looks and everyday is the same - warm and sunny - however not all of them can stand it, including one of Megan's new friends, Triti. Also in Megan's circle is an American, Danny, to whom Alice is attracted.

Alice spends more and more time online but begins to realise she can help Triti through her actions in the real-world. She is assisted by a friend of her ex-boyfriend, a rich techno-whiz and together they begin to investigate Triti's death...

The narrative is interrupted from time to time by paragraphs from Megan's killer and it looks like he has his eyes set on Alice...

Soul Beach is an intriguing beginning to the Megan Forster trilogy and combines a romance (with a potential love-triangle I think), a crime (I love a good whodunnit) with a science-fiction premise. This being the set-up book there was slightly less investigating and more romance than I personally would have liked but then I'm a crime buff. The identity of the murderer is a real mystery and though you are given hints - they are probably misdirection! Drawing on her journalist experience, the author gives the reader a look at the media's impact on a bereaved family and we also get to see how Megan's death has changed everyone in that family and how outsiders interact with them.

Fans of the Beautiful Dead series by Eden Maguire should enjoy Soul Beach and I can't wait to read the next part in the series, Soul Fire, which is due out in July.
Posted by Karen (Euro Crime) at 10:09