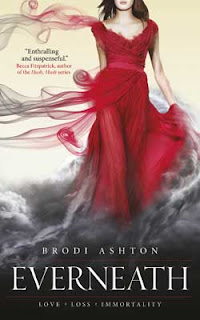 Review: Everneath is the first in a trilogy and in which we meet Nikki Beckett and Jack Caputo. Nikki has spent the last six months in the 'Everneath' wrapped around Cole, an Everliving who survives by feeding off the emotions of humans. Cole wants Nikki to remain in the Everneath but she chooses to return to the surface to find the boy whose face has been haunting her during her exile. The catch, is that she only has six months to say her goodbyes properly before she will be dragged down to the hell-like 'Tunnels' for ever.

When Nikki reappears, the rumours fly that she's been on drugs. Her emaciated appearance and dulled emotions support the rumours. Very slowly she reconnects with Jack and her best friend Jules but Cole is never far away trying to get her to join him and become an Everliving. Nikki has to try and find a way out of her bargain with Cole and escape the tunnels...

As the six months count down, Nikki finds out more about Greek mythology (Persephone, Eurydice and Orpheus being particularly relevant) and at the same time the reasons why Nikki agreed to go with Cole are revealed to the reader.

Everneath is a quick read though I found it took awhile for Nikki to start fighting back. Many precious weeks are wasted but fight back she does, eventually, as she recovers from the setbacks which left her vulnerable to Cole's "attractions". Jack's adorable; a jock, a quarterback and totally besotted with Nikki though she doesn't seem to see it. (Plus I loved the fact that he's a hero who wears glasses.) As Nikki comes to life the tension really picks up as information is gathered and a plan made. The dramatic ending means it's going to be a long wait for Everbound, which is out February 2013.