My place of work (library) has recently set up a reading group for children. So far we have 10 girls aged 9-12. At the first meeting they all took a copy of The Case of the Captive Clairvoyant by Anthony Read. This is the second in the "Baker Street Boys" series. 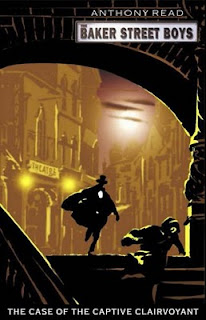 I've read it and I was pleased to read that there are 3 girls in the Baker Street Boys. The "Boys"are a gang of urchins who live in a secret cellar in Baker Street and offer their aid to the great Sherlock Holmes.

In this adventure the gang help out Mary, the step-daughter of American, Mystic Marvin who is doing a mind-reading show at the theatre, where one of the Boys - Sparrow - works. She asks to be rescued from him. There is a murder and another kidnap before the case is solved and Mary's life improves enormously.

The Case of the Captive Clairvoyant was easy to get into, the pace kept up and the behind the scenes look at a Victorian theatre show was very interesting. Blame my advancing years but I couldn't quite keep the many (7) "Baker Street Boys" straight in my head, but it didn't matter. I felt the focus was on action rather than characters. The cover aims the series at boys but girls should find them just as appealing I think.

Now what did the children think?
Well they enjoyed it as well too. And unlike me could name every "Boy" and they could also answer all the quiz questions I'd set them. They found the book a bit scary in parts and the murder was a surprise but didn't upset them. There was some discussion over the cover as to who was chasing whom and what did 'clairvoyant' mean. This was a book they wouldn't normally have chosen and some will try others in the series. So I feel this one was a hit.

I gave them them the following list of Sherlock Holmes themed series which are available in the UK, if they want to read more:

Peter Abrahams
Ingrid Levin-Hill, Echo Falls (she is a big Sherlock Holmes fan)
1. Down the Rabbit Hole
2. Behind the Curtain
3. Into the Dark

I'd love to have been able to give the group Nancy Springer's series about Holmes little sister, Enola which is currently 6 books strong but is not published in the UK:


Next time: Ghost Writer by Julia Jarman
Posted by Karen (Euro Crime) at 20:05