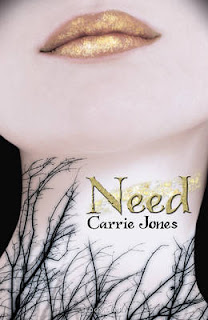 First Line:
Everybody has fears, right?.

Review: Need is the first in the series (the third book, Entice, is due out January 2011) and introduces seventeen-year-old Zara White. Zara has been living in Charleston but the death of her step-father sends her into a depression her mum cannot help her with and so Zara is sent back to her step-grandmother's home in a small town in Maine. Her mum hopes the change will help her.

Zara starts school there and soon meets a couple of hot boys (Nick and Ian), makes an enemy of the top female athlete/cheerleader and is befriended by a bouncy girl caused Issie and her temporarily wheelchair-bound best friend Devyn.

But Zara is being stalked. She realises that, when a man she saw in Charleston is now in Maine and he is watching her, pointing his finger at her. And boys are going missing. It's not safe to go out at night and her grandmother is very protective. Her friends think they know what's going on but what they ask Zara to believe is only the first in a series of impossible facts she has to swallow. With her life in danger, no-one is who, or what, they seem...

I really enjoyed Need and I'm so glad that the long wait I've had whilst the library bought more copies has been worth it. I really liked Zara's voice and her dry sense of humour. She's stubborn and foolhardy but also wants to do what's right, both for people she doesn't know - she writes letters for Amnesty International - and those who've become close to her. The events in Need show her what she herself is capable of but not necessarily always in a good way. Initially she seemed quite slow to pick up what was going on around her but her brain power increases as the book goes on, as does her fear, and she devises the plot to save the day.

And Nick, he is a hero in the "I'll never let anything bad happen to you" mould and though he doesn't always deliver, he is rather adorable. The romance that develops in the book is one of those that matures quite quickly and intensely and is a bit lovey-dovey at times but didn't irritate me as some other ones have. I don't want to say much about the paranormal/supernatural element though the website address on the back of the book is a bit of a giveaway - I'll just say it's not about vampires!

Need is absorbing and at times, a very tense read with some violence directed at the lead characters. It's set in a well-realised world which I'm eagerly awaiting a return trip to with Captivate.
Posted by Karen (Euro Crime) at 10:10