I was really excited to receive an invitation to ATOM Towers for a preview of their 2011 list, so along with another ten bloggers (see links on the ATOM Blog) we turned up last night at their amazing building on the Thames. Champagne flowed (OJ for me) and cupcakes were admired before the team gave a presentation of the 2011 delights whilst we munched said cupcakes: 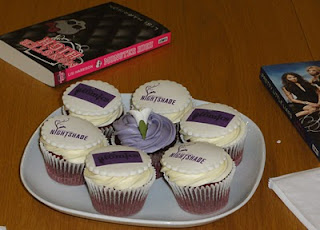 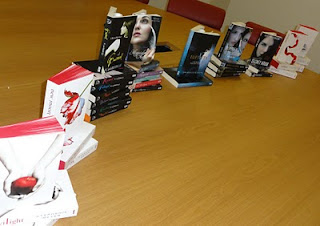 The 2011 list is quite varied with lots of good stuff but being a crime fan these two titles really stood out for me:

Rosebush by Michele Jaffe (March 11)*
Jane is found, near death, in a rosebush - a victim of hit and run. But as she's convalescing she realizes that her friends' stories and her memories of what happened that night aren't adding up. And now the only thing she does know is that one of her friends isn't so friendly. One of them tried to kill her. Sometimes the truth is a very thorny thing...
*lucky for me it was in the goody bag (see below). This is ATOM's first non-paranormal title.

The Game: The Valley by Krystyna Kuhn (May 2011)
The famous Grace College, located in a remote valley in the Canadian Rocky Mountains, is an elite school for the highly gifted. But to Julia and her brother, it's a much-needed escape. But when they stumble upon a dead body their first week they'll learn they can only run so far from their past. And that the valley has secrets of its own...
This is ATOM's first translated book and there will be a book every 9 months. 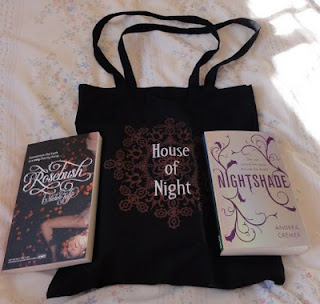 The Official Twilight Illustrated Guide is being written by Stephenie Meyer (contrary to rumours) and will be published 12 April. It will be under strict embargo.

The sequel to Nightshade, Wolfsbane will be out in July.

Atomics
More details on this to come but ATOM want to get younger readers involved in reviewing and chatting on an ATOM forum. There will be limited numbers of free books for reading groups etc.

Many thanks to ATOM for the invite, food and books!

Read more write-ups at Floor to Ceiling Books, Thirst for Fiction, Once Upon a Bookcase, The Pewter Wolf, Sarah's Book Reviews and Words and Pieces.
Posted by Karen (Euro Crime) at 13:30