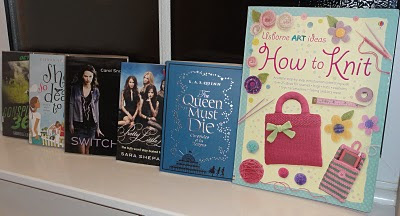 Conspiracy 365: October by Gabrielle Lord
On New Year's Eve, Callum Ormond is chased down the street by a crazed man with a deadly warning:

They killed your father.
They'll kill you.
You must survive the next 365 days.

Cal’s beginning to understand only too well the meaning of the word ‘deadline’ as he struggles to stay alive. His enemies have united and the search for him is trebled. How much longer can he evade the assassins and cops trailing him, as well as trying to solve the legendary Ormond Riddle? Will the secret be lost for ever?

She's So Dead to Us by Kieran Scott
Home is where the hate is...Ally Ryan's back in Orchard Hill, a place she vowed never to set foot in again. Not after the trauma of her family fleeing their home in shame when her dad's business dealings almost bankrupted their local community. Now she's moved back, but her old 'friends' are cutting her dead. And while she may have outgrown the country club-trust fund-new car every year-lifestyle, they certainly haven't - and they won't let her forget that now she's living on the wrong side of the tracks. As if dealing with past demons and current grudges isn't enough, now Ally's met the handsome, wealthy and totally into her Jake Graydon, who just happens to live in her old house and be part of the clique that's rejected her...complicated much? Ally was hoping to start her life over again, but she's learning that some things just can't be forgotten...

Not much happens in Claire's sleepy beach town, but that's okay. All she wants is to hang out with her best friend, make the high school swim team, and convince Nate, the guy of her dreams, to stop calling her "Dude." And, oh—she'd really, really like to stay in her own skin.

Ever since Claire hit her teens, electrical storms have been making her switch bodies. Usually she's back to her old self in no time. But when something goes terribly wrong, she finds herself stuck as another girl. And not just any girl, but the icy beauty who has caught Nate's eye.

Suddenly Claire goes from being Miss Average to Miss Gorgeous—the model-thin blonde that every girl wants to look like and every guy wants to date. Will she ever figure out how to get back to her old life? More importantly, will she want to?

Pretty Little Liars by Sara Shepard (ATOM, out now)
Aria, Emily, Spencer, Hanna and Alison have been best friends since the third grade. They go everywhere together, thinking no-one can come between them. If anyone is the ringleader of the group it is Alison, and the other girls cannot help but confide all their secrets to her. One night, during a sleepover, Alison goes missing. Her body is never found. The girls mourn her death but move apart after time, assuming their secrets have disappeared with Alison too. Three years later and Aria is having an affair with her teacher; Emily is questioning her sexuality; Hanna is a thief; and Spencer is flirting with her sister's fiance. They all think their secrets are safe, until they starting receiving messages from the mysterious A - who knows exactly what they are all up to, and is threatening to spill the beans ...

The Queen Must Die by K A S Quinn (Atlantic, out now)
Atlantic's first children' book announces the arrival of "Chronicles of the Tempus", a major new trilogy for 9-12 year old readers. Imagine E. Nesbit crossed with Philip Pullman. Why is Katie Berger-Jones-Burg under a sofa in Buckingham Palace? The last thing she can remember is reading in her bedroom, trying to block out the sound of the TV. Now she is in London, at the height of Queen Victoria's reign. Something very strange is going on. Together with her two new friends - Princess Alice, the young daughter of Queen Victoria, and James O'Reilly, the son of the royal doctor - Katie must discover why she has been sent back in time. And who are the weird and frightening creatures who seek her out? The key, it seems, lies with the enigmatic Bernardo DuQuelle. As the dark forces moving through the royal household begin to take control, Katie and her friends uncover a plot to assassinate the Queen and unearth an even darker mystery...

How to Knit by Fiona Watt (reviewed here)
Posted by Karen (Euro Crime) at 20:45