Review: Angel by L A Weatherly 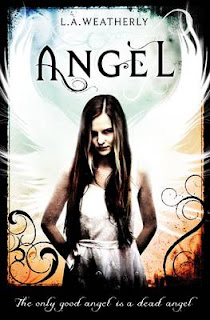 First Line:
"Is that your car?" asked the girl at the 7-Eleven check-out counter.

Review: Angel is the first part in a trilogy and in itself is a bit of a doorstop of a book at 500 pages but nonetheless I flew through it.

We are introduced first to Alex, one of the few people who knows that the Angels appearing to people are actually harmful to their health. The Angels have fled their dying world/dimension and are just the first wave to see how hospitable Earth is to them. Very is the answer, so much so that a new batch is on its way soon. Alex is an Angel Killer and the only way to kill Angels is to shoot their halo ie their heart.

Willow is not an ordinary school-girl, she's psychic and everyone thinks she's weird. When she does a reading for the star pupil, Beth, at school, she too discovers that there are Angels and they are not friendly, and tries to stop Beth from abandoning her studies and enrolling at the new religious phenomenon: the Church of Angels.

Next thing Alex knows is that he gets a message telling him to kill another Angel but when he gets there he discovers Willow. Unable to kill her, he follows her to the Church of Angels where she seeks Beth but the Angels realise that Willow is 'the one' and that she could stop them all. The Angels set their followers on to Willow and Alex steps in to save her life, and they are forced to go on the run. The book then concentrates on their developing relationship, their earlier lives and of course how they stay alive until Willow's given the chance to fulfil her destiny. Can she stop the second wave of Angels invading and destroying human civilisation as we know it?

The things I liked about Angel are many; I like the main characters, both are strong and resourceful and are equals. I particularly like the world built by Weatherly - how Angels are not from 'heaven' but have more of a science-fiction provenance. The Church of Angels set-up was interesting; I enjoyed reading the bits set there just as much as following Willow and Alex. Though the story isn't action all the way, the quiet moments are filled with back-history: we get to know about what happened to Alex's family and how Willow and her mum ended up living with her aunt.

I did have a couple of niggles: one, was that, like most disaster movies, it was very US-centric - the Angels seem to be restricted to North America as there was no mention of other countries being affected. Doctor Who is very London-centric but we do at least get tv screens showing the news from around the globe when the world is about to end. I would have liked to have a more global aspect to the danger. The other niggle is that the romance that develops, seemed to me to go from zero to 'I want to die with you', in a very short period of time and some of the romantic dialogue was a bit painful to read for this old cynic, but I hope it will be easier on the eye for the younger, target audience.

Those points aside, Angel is an intriguing read, very much a page-tuner, which offers something different. It should have massive appeal to fans of Twilight and the ilk and I'm looking forward to reading the next two parts. The dates to look out for are: