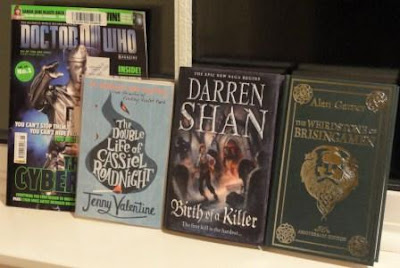 The Double Life of Cassiel Roadnight by Jenny Valentine
Two boys. One identity. He can change his life if he says yes…

An explosive new mystery from the award-winning author Jenny Valentine, The Double Life of Cassiel Roadnight is the story of a boy who assumes the identity of a missing teenager and in-so-doing unearths a series of shattering family secrets – and the truth about who he really is.

With all the classic hallmarks of a Jenny novel – a fantastically strong, sensitive and memorable first person narration; themes of loss and betrayal, family secrets and personal identity; truly quality writing that is 'literary' but never inaccessible or pretentious, this is the thrilling new novel from the author of Finding Violet Park.

When Colin and Susan are pursued by eerie creatures across Alderley Edge, they are saved by the Wizard. He takes them into the caves of Fundindelve, where he watches over the enchanted sleep of one hundred and forty knights.

But the heart of the magic that binds them – Firefrost, also known as the Weirdstone of Brisingamen – has been lost. The Wizard has been searching for the stone for more than 100 years, but the forces of evil are closing in, determined to possess and destroy its special power.

Colin and Susan realise at last that they are the key to the Weirdstone’s return. But how can two children defeat the Morrigan and her deadly brood?

Birth of a Killer by Darren Shan

Following the massive success of the Demonata series, Darren Shan is back where it all started – telling the life story of the vampire Larten Crepsley. Spanning centuries and continents, taking in sea voyages, murder, war and love, this is the epic, bloodsoaked tale of a vampire who started out a nobody… and ended up changing the world forever.

When Larten escapes the terrible workhouse in which he toils, he doesn’t know that he is running from an early death… into another kind of transformation. After meeting the mysterious vampire Seba Nile while sheltering for the night in a crypt, Larten finds himself drawn into the shadowy world of the vampire Clan. As he travels and learns, Larten finds himself enjoying the adventure he has always dreamed of, seeing a world beyond any he suspected in his poverty-stricken youth.

But Larten begins to discover something else, too. Much like death, becoming a vampire is something you can’t come back from…