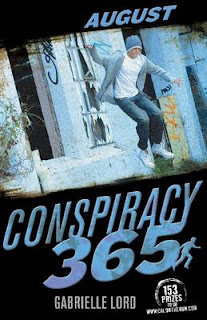 Review: August is the eighth in the Conspiracy 365 series in which a new book comes out at the beginning of every month for a whole year. I've reviewed June and January so far and I'm still reading and enjoying this series.

Up until now, each entry has ended in a major life-threatening cliffhanger for our on the run hero, sixteen-year-old Cal Ormond and July's ending was the worst so far. I won't say what it was but you may be able to tell from the first line quoted above. However August breaks the trend and ends on a different but equally dark note.

August's entry doesn't see the main mysteries of what is the Ormond Singularity, why does someone want Cal dead and so on explored much further but nonetheless this has been the most exciting book (for me) to date. The focus is away from the puzzles and instead Cal has to rescue his sister Gabbi from kidnappers. His family thinks he's behind the kidnapping and so his only help comes from his two friends and a disgraced former policeman. Much running and chasing ensues, as Cal keeps ahead of the authorities in this tense episode which ends bleakly for Cal.

I'm only doing a brief review as I'd only be repeating myself from June and January but this has been the one I've enjoyed the most though they are all entertaining. As the year counts down I know I'm going to miss my monthly fix of Australian adventure, when the new year starts.
Posted by Karen (Euro Crime) at 19:08