Review: The Cardturner by Louis Sachar 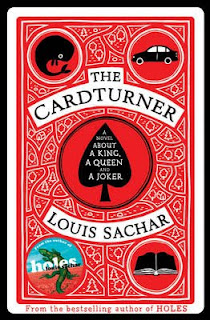 First Lines: Ever since I was a little kid, I've had it drilled into me that my uncle Lester was my favorite uncle.

Review: Alton is seventeen. His parents have continually tried to suck up to/get in with his uncle Lester who is very rich and aloof. Lester, now in his seventies and suffering from diabetes has gone blind. He is a great bridge player but an argument over what card he should play has led to a vacancy that Alton is offered during his summer holiday. He is to be his uncle's chauffeur and more importantly, his cardturner. Alton tells Lester, or Trapp, as he's known in bridge circles which card he has and what cards are being played and Trapp tells Alton which card to play.

During the summer, Alton takes Trapp to the local club and to more prestigious tournaments. In the background to the bridge contests, Alton tries to learn more about his uncle and what happened to his uncle's bridge partner of 40 years ago; he tries to deal with the loss of his girlfriend to his best friend and his growing attraction to Toni, his uncle's previous cardturner. Plus there are explanations on various aspects of bridge which are provided in short and long versions depending on your interest.

If you told me I'd read and enjoy a book about bridge, I wouldn't have believed you but I have and I did. The Cardturner is so cleverly structured and well written, with great characterisation, that it pulls you in with its mix of mystery and romance and family life. Alton addresses the reader a lot so you feel as if you're there, a friend of the family, perhaps. He is a mix of cuteness, cleverness and stupidity which is hard to resist. The story takes a sudden turn about a third from the end which to me was quite unexpected but the groundwork had been carefully laid. The Cardturner also touches on issues of mental health and shows how bad things were for women just 40 years ago in terms of how much control they had over their own lives.

I know a little more about duplicate bridge now (which should help in reading/watching classic crime stories) but even better - a colleague's two sons have both read The Cardturner and are off to learn how to play bridge, so the author's intention of bringing the game to a younger generation has worked.
Posted by Karen (Euro Crime) at 20:55