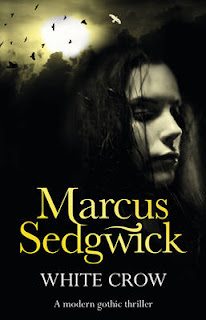 The earth quakes, the graves burst open, the dead arise and stream on in endless procession.

Review: The author's previous book, Revolver, was set in the frozen north of the Arctic Circle. White Crow is a chiller of a very different variety. It's set in a village modelled on the coastal Suffolk village of Dunwich which has been partly swallowed up by the sea over the last few centuries.

Rebecca and her father have fled from the city to the tiny village of Winterfold for the summer holidays. They do not have a very good relationship and there is much tension in the air which is explained more as the story progresses.

Rebecca is bored but soon meets a strange local girl of her own age, Ferelith. Ferelith is very clever and orphaned. The two girls spend time together more because there is no-one else for them to hang around with, than a desire for each other's company.

The story of their summer exploring Winterfold and its ruined churches and Hall, is told in the alternating viewpoints of Rebecca and Ferelith. In addition there are extracts from the eighteenth century diary of the vicar of Winterfold who tells of his collusion with a French doctor to solve one of the great mysteries of life.

White Crow is a gripping read but it does leave some unpleasant images in the mind. The two girls, though fairly unlikeable do feel real - Ferelith gave me the creeps. The way the story twisted and turned, filled me with tension, and the ending was quite unpredictable. White Crow is a dark, compulsive, if slightly gruesome in parts, read which was longlisted for the Guardian's Children's Prize 2010.
Posted by Karen (Euro Crime) at 19:22