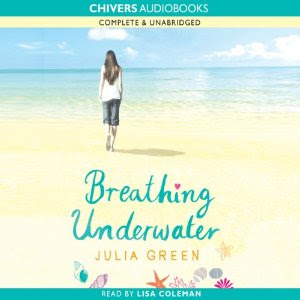 Review: Fourteen year-old Freya returns to the collection of islands (an unnamed Isles of Scilly), where her grandparents live, for the summer holidays. This is the first year she's there on her own. Her older brother Joe drowned there last summer and her parents haven't been back. Freya can't believe that such a vibrant personality has just vanished leaving no trace behind and recently she has the sensation of him being there, just out of view, a voice in her head.

As the days go by, Freya settles back in, meets that year's campsite residents including Danny, who looks a bit like Joe, plus Izzy and her boyfriend Matt. Details of what happened the previous summer are told amongst the chapters about the current happenings. Through a combination of friendship and love and maybe something unworldly, Freya comes to terms with what happened to Joe and her grief and guilt abate.

I have been utterly gripped by Breathing Underwater. I didn't want it to end. It's one of those audio books where you do extra chores so you can carry on listening. My heart went out to Freya, for her loss and for wrongly carrying a burden of guilt and the belief that she could maybe have prevented Joe's death. Her parents, grief-stricken though they naturally are have withdrawn from her rather than cherishing her. As well as the well-developed character of Freya, the other characters are equally alive: the bohemian Izzy, the gorgeous Matt, the shy Danny who has a crush on Freya. The sense of place is equally tangible; I can picture the island and layout clearly.

This is an absorbing, quiet tale of how life goes on and how a terrible loss can be overcome. A compulsive listen, which Lisa Coleman narrates brilliantly.
Posted by Karen (Euro Crime) at 20:55