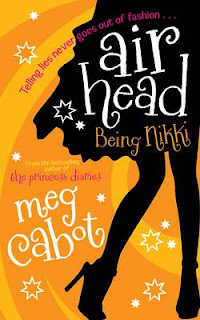 Review: The following contains spoilers for the the first part of the Airhead trilogy, Airhead.

In Being Nikki, the second part of the Airhead trilogy, life really gets complicated for heroine Em Watts. In Airhead, Em's brain ended up in the body of teenage supermodel Nikki Howard. Em, a non-make-up wearing, computer games playing girl has had to become a leader of fashion, and she is juggling modeling with being at school so she can be near her best-friend Christopher whom she's in love with. Christopher thinks Em's dead and barely gives "Nikki" the time of day. But they are thrown together when Nikki's mother goes missing and Christopher offers to help. His payment is high though as he wants to bring the people behind Em's death, her boss in fact - Stark Enterprises - crashing down which will impact on Nikki, her friends and family. What should she do? And how can she shake off the men who love Nikki and attract the one who loved Em?

Being Nikki, sees Em adjusting to her situation and maturing as well. She's more open minded than before and people like this new Nikki more than the old one. I did enjoy Being Nikki but not quite as much as Airhead. Perhaps a bit too much fashion stuff for my taste and Em did get a bit annoying when she constantly repeated the same sentiments about Christopher - about how he was in love with a dead girl but she's not dead she's me etc.

Being Nikki has thrills, romance, laughter and a behind the scenes look at a celebrity lifestyle plus a great cast of secondary characters such as Nikki's room-mate Lulu who is convinced Nikki has had a "spirit transfer". It ends on a huge cliff-hanger that provides plenty of scope for conflict and confusion. I'm so glad that the final part of the trilogy, Runaway, is immediately available to me.
Posted by Karen (Euro Crime) at 13:23