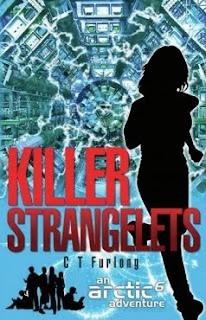 Review: Killer Strangelets is the first in a science-themed adventure series and introduces the ARCTIC 6: cousins, Iago, Aretha, Cam, Tara, Renny and their friend Charlie.

Iago and Aretha's father is kidnapped by accident - the target was his twin brother Uncle Jonas, a big-wig scientist at CERN in Switzerland. Jonas has been concerned about the experiments going on there and has built an emergency shutdown button in case things get out of hand. If something went wrong "killer strangelets" could be formed, which destroy matter and could lead to the destruction of the universe.

Jonas is able to tell the gang this before being hustled off by government security officers. The gang have to a) rescue Iago and Aretha's dad and b) get to CERN and shutdown the Large Hadron Collidor before it triggers the end of the world.

The story mostly takes place in the CERN complex, where the group has to solve riddles and avoid repulsive baddies and physical obstacles, all whilst the clock is ticking... Can they save life, the universe and everything?

Killer Strangelets is an action-packed read. It's told in short chapters which keeps the pages flying. The main leads in this adventure, are the older children, Iago and Charlie with the younger Renny masterminding all the technical stuff which will allow Charlie to get into and use her running expertise in the tunnel where the experiments are carried out. It's a very up to date adventure with the communications mostly being carried out by video calls over mobile phones. I really liked the CERN setting which has also been used to great effect in the audio drama: Torchwood: Lost Souls.

Killer Strangelets should appeal to older children and upwards. If you enjoy Gabrielle Lord's Conspiracy 365 series then you should try this one.

Read more about this series, including biographies of the gang at the ARCTIC 6 website.
Posted by Karen (Euro Crime) at 13:28